Much of the nitrogen,  phosphorus and potassium in our urine can be reclaimed. Our pee is a valuable fertilizer – all those elements play an important role in agriculture.

Nitrogen is crucial to plant growth, reproduction and is the building block of plant proteins. Potassium is associated with transport of water, nutrients, and carbohydrates within plant tissue.

Phosphorus is an essential component in all forms of life – it forms part of the structural framework of DNA and RNA molecules. It’s used in a variety of industries, but mostly as an important (and very much abused) agricultural fertilizer.

It appears that as a result of the consumption of phosphorus for agriculture over the last 100 years or so, the world is heading for a supply crunch.

Some believe the world’s deposits of phosphorus will be depleted in within about 50 years. We’ve wasted so much of it, with massive quantities winding up in waterways and/or flushed out into the ocean as a result of runoff from farming operations.

Part of the solution to dwindling supplies is our pee. We excrete 100 – 190 gallons of urine each per year and it’s one of the most concentrated sources of phosphorus. The average person will excrete around 365 grams of phosphorous a year.

It’s also a great source of other nutrients as mentioned; for example, the amount the average person urinates in a year contains around 3.5kg of nitrogen. This is sufficient to fertilize 300-400 m2 of crops to an equivalent level of about 50-100 kg of nitrogen per hectare.

So, how to collect this urine? One way is through urine separating toilets – and they have been on the market for quite a while.

Urine separating toilets have a bowl in the front for urine, with faeces going to the rear. The bowl in front flushes to a separate storage tank. 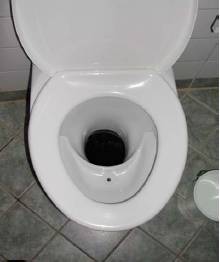 Urine reclamation is still only occurring on a small scale, but gaining popularity in Europe. In the Municipality of Tanum, Sweden, there are farmers who collect the storage tanks of urine for spreading on their farmlands.

After being filled, the containers are sealed and left to stand for the next six months to make it safe for use. Urine is generally pretty sterile, but it can pick up nasty bugs from the surrounding skin when being expelled. It also needs to be “aged” so as to not damage plants – “fresh” urine can burn plant roots.

Elsewhere, a program in Nepal is helping farmers use urine and the results have been encouraging. Similar small projects are popping up around the world.

Human urine was commonly used in many places around the world prior to the invention of the flushing toilet. After that occurred, attitudes changed and urine became regarded as toxic waste, rather than the valuable fertilizer it is.

If you’re keen to learn how to effectively and safely use urine on your own veggie patch, read Practical Guidance on the Use of Urine in Crop Production.