Who doesn’t love a teddy bear? I have the bear from my childhood up on the shelf beside me. Even as an adult if I’m ever stressed out, if I remember to take a look at “Little Ted”, it relaxes me a little – probably due to the childhood associations of security.

Teddy bears are big business and a favorite gift – but would you buy the one below? Before you click away after seeing it, please allow me to explain. 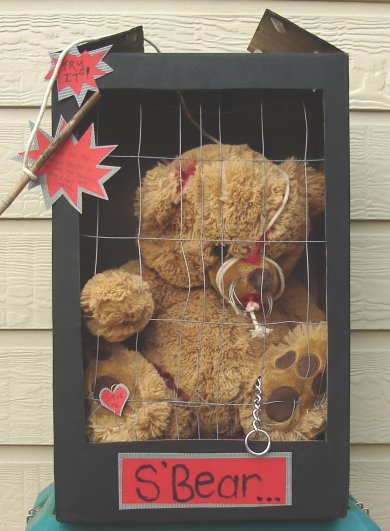 This is a college art assignment piece created by Kirstee W. of Adelaide, Australia. The brief was to create an art work, with the idea of “toy” as the theme, whether it was using a toy in the work, or making a toy from scratch.

Kirstee used the issue of dancing bears as a concept and portrayed it through a plush teddy bear. She chose it through reading animal liberation articles and through personal knowledge of the goings on in the animal rights world.

Kirstee felt it would be a good way to complete the brief of the assignment, while sharing with her class a serious issue happening in the world right now that they otherwise may never have heard about – the plight of the dancing bears of India.

Kirstee says – “I knew it would shock and disturb people, but things like this need to be put in front of people so they notice and realize how bad it is. The packaging was meant to look like a real childrens teddy in a box, with a small bio on the side and signs telling people to “try it”.”
The dancing bears of India

The Sloth bear is the main species of the dancing bear trade, despite protection under India’s Wildlife Protection Act 1972, up to 1,000 sloth bears are kept in captivity as dancing bears and 100 cubs are poached annually.

Not so much a cultural tradition, but a tourist attraction these days, The Free the Bears Fund urges travellers to become aware of the cruelty involved in training these bears, which includes:

– removal of teeth without an anaesthetic

– placement of tender paws on hot plates in order to train the bear to “dance”.

And that’s just scratching the surface. While these bears can live up to 25 years in the wild, they rarely live to be 10 once captured due to infection, malnutrition and stress.

Free the Bears Fund urges people to write letters of protest to the Indian, Turkish and Bulgarian governments to end this  barbaric sport and encourages travellers not to encourage the practice by viewing the dancing bears.