This was just sent to me by the folks at Bridge Development and I thought it might be of interest to some GLT readers:

With its creative design, the house has the ability to transform itself from a livable workplace during the day to providing two private comfortable bedrooms during the night. 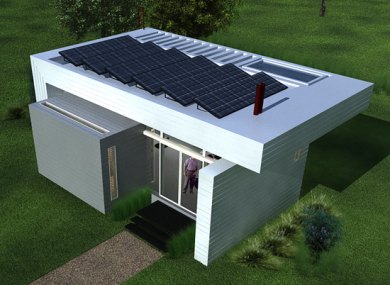 The day/night effect has been specifically created for Nano. This technology has helped set the house apart and has been praised by thousands of world-conscious individuals.

The house is set not only to solve the world’s housing problems, but to bring down Co2 emissions worldwide. The Nano uses passive solar energy, which is completely free, non-polluting, and renewable.

We are all aware that the problem of inadequate or non-existent housing has reached crisis proportions globally. Though improving housing conditions around the world is a complex issue, Nano has come up with a solution that is economically viable, sustainable, and attainable. The Nano house can be ordered and build almost overnight, thereby making it perfect to use after a catastrophe.

Bridge Development has a mission to solve the housing problem around the world. “We cannot sit here and wait for the world to go homeless, we need to act now,” says Gaby Strehler, the creator and inventor of Nano house in a recent national radio interview. “The option is now available and anyone can afford to own a home.”

One of the special features of the homes for better use of space is the “suspending system” allowing a bed to be suspended within the ceiling cavity, over the couch in the living room and over the table in the dining room.

You can learn more about the Nano house here (the site is a little scant on details about materials used – an important aspect of sustainable building).