It’s nice to sit back from the environmental doom and gloom that hits my inbox each day to celebrate the wonders of nature – after all, it’s what the battle is all about.

The biodiversity of this planet never ceases to astound me and I find the discovery of new species particularly exciting as it means mystery remains in the world of wildlife. We still haven’t managed to formally identify and label everything this planet calls home – and I think that’s nice; especially for young folks with their sights set on discovering new species. However, the situation also poses a threat as what we don’t know, we can’t try to protect.

Averaging just 7.7 millimeters in size – less than one-third of an inch – this tiny frog was recently discovered by Louisiana State University’s Chris Austin and PhD student Eric Rittmeyer in New Guinea, which is a stone’s throw from the northern tip of Australia. 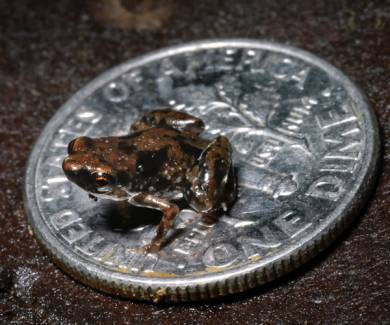 Paedophryne amanuensis on a dime 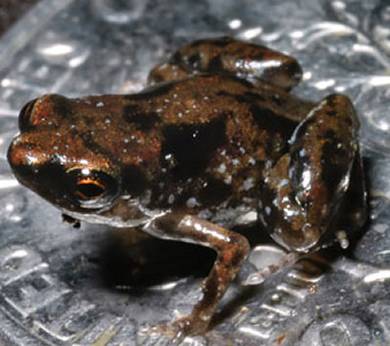 A close up of the little guy
(Image credit – Chris Austin)

Paedophryne amanuensis primarily inhabits leaf litter on the floor of tropical rainforest environments and the male has a high pitched mating call, reminiscent of an insect’s.

This find is important to the scientific community as the size limit of vertebrates is of interest to biologists who as yet don’t have a good understanding about the functional constraints that come with extreme body size says Dr. Austin.

Dr. Austin’s research on the frog has been published in the Public Library of Science One journal, or PLoS.

So when it comes to vertebrates (critters with a backbone), we now have the Blue Whale at over 25 metres (more than 75 feet) and at the other end of the scale, a little frog called Paedophryne amanuensis.

Prior to this frog taking pride of place as the smallest of the small, the creature previously recognized as the world’s tiniest vertebrate was an 8 millimetre Indonesian fish called Paedocypris progenetica.

Frogs are incredibly important in the ecosystem and can be found just about everywhere except in Antarctica and some islands. Most are extremely sensitive to changes in their environment and face a number of challenges, including a global epidemic of a deadly fungus I reported on in 2007. Around 170 species of frogs have become extinct over the past decade from the fungus and a further 1,900 species are threatened.

Even noise pollution presents a threat to these amphibians and is believed to be interfering with the reproductive processes of frogs in metropolitan areas.