A nifty item I picked up a few days ago is the wind up LED lamp below. I’m still not totally sold on LED stuff as the light produced by cheaper products is pretty harsh and icky; but for the roughing it I do and for emergencies, this gadget fits the bill and will save on batteries, generator time and route my solar panel output to more important tasks – such as powering the notebook I’m writing this on.

Since getting the solar panel rigged up, it’s been wonderful to work in silence and immerse myself in the sounds of the bush instead of having to listen to the generator putting away for hours on end and watch it polluting the air.

The lamp cost me around $20. It contains 5 LED’s and by winding it for 30 seconds, I get 30 minutes of light – I think that’s a pretty fair exchange. The light is  enough to prevent me from tripping over stuff in a room or outside and does allow me to read a book if the lamp is close enough.

I find I need to give it a quick wind up boost after reading a few pages as the light level drops just past the point of comfortable reading (of course), but I do love the idea of generating my own light :). 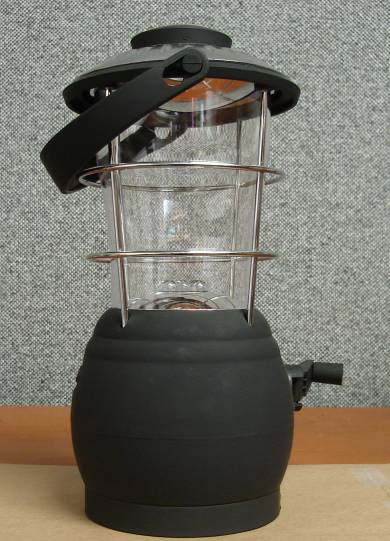 Unfortunately, there was no brand on this lamp; there’s nothing stamped on it or the packaging; but I’m sure they are being sold under a multitude of different names. You’ll likely find something similar at your local hardware or camping store.

As mentioned, this was a cheapie product – if you’ve got the money to spend, LED technology has come a long way in recent times and there are now many products on the market for full fledged domestic lighting applications.

While Compact Fluorescent Lamps (CFL’s) are far more efficient and durable than traditional incandescent globes, LED is even more so. The Lifespan of LED’s are around the 60,000 hour mark compared the CFL’s 10,000 hours. While more expensive up front than a CFL, the cost over lifespan works out to be far cheaper. Additionally, while CFL’s contain mercury in small amounts, LED’s do not.