Australia has its share of amazing animals and I feel very privileged to see some of these creatures on a regular basis.

We used to have so many more species, but as in other countries, we have a habit of exterminating them and engaging in other activities that contribute to their demise – a habit that has made us the main culprit behind what’s known as the sixth great extinction.

An animal I would have loved to have seen is the thylacine, better known as the Tasmanian tiger. The size of a large dog, the thylacine was one of only two marsupials to have a pouch in both sexes. It had a very large set of jaws that it was able to open to an amazing 120 degrees. 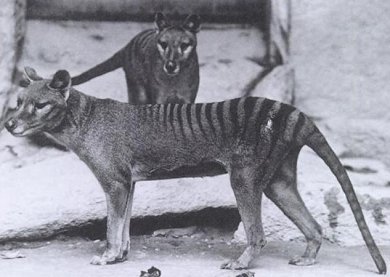 Tasmanian tigers used to exist on mainland Australia, but by the time of European settlement, they could only be found on the island state of Tasmania. It’s believed the mainland tigers disappeared around 2,000 years ago due to competition from our indigenous peoples and the dingo, which was also an introduced species.

Within around 130 years of European settlement in Tasmania, the thylacine was extinct.

Even though they were shy of humans and settlements, the Tasmanian tigers were considered a pest and believed to have attacked sheep – and that was enough to give them a death sentence. A bounty was put on them and thousands were slaughtered. The species also suffered through disease, the introduction of dogs and humans altering its habitat.

It seems the reputation of being a sheep killer may have been undeserved. A researcher from the University of New South Wales Computational Biomechanics Research Group, Marie Attard, has determined even though it was a largish predator (around 70 pounds), the Tasmanian tiger’s jaws were rather weak and really only suited to catching smaller prey.

The last of the Tasmanian tigers, Benjamin, died in Hobart Zoo, on 7 September, 1936; a couple of months after the Tasmanian government finally made the thylacine a protected species.

While the thylacine may have still become extinct even without the pressure of the bounty, perhaps if the protection finally granted to it occurred just a couple of years earlier, we may have this incredible creature still with us today.