A bit over 4 years ago, I first posted about in-vitro meat, also known as cultured meat. In 2009 I posted an update and since that time, research has progressed to the point one scientist says he is getting close to serving up a full hamburger.

The “test tube” hamburger, created from cow stem cells, is worth around €250,000 euros (about $330,000) according to Maastricht University scientist Mark Post, who developed the burger in his labs. Of course, when and if the process gets to commercial stage, the final product won’t cost anywhere near as much. I assume the 330k is just the development cost to this point.

The burger breakthrough was announced at the AAAS (American Association for the Advancement of Science) 2012 annual meeting.

The idea behind cultured meat is a relative handful of animals would serve as donor creatures, supplying the stem cells that would be grown into muscle tissue resembling steak or hamburger.

If this were successful, not only could it save billions of animals from slaughter or even them needing to be raised in the first place, it would also save millions of hectares of forests being turned into paddocks. 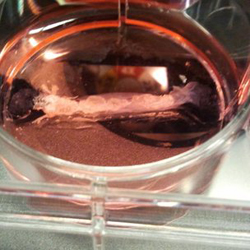 Yes, it’s not really appealing. Perhaps it just needs (aside from quantity) a burger bun and some lettuce – and cooking of course. Some of the burgers I’ve eaten that I dared to take a peek under the lid at didn’t look much better.

I haven’t changed my opinion since 2007 – I’d take a crack at tasting this product. While part of me feels slightly repulsed by it (but the slaughter of animals and even some meat product preparation is hardly attractive anyway), cultured meat would certainly ease my conscience – both from an environmental and humanitarian viewpoint.

If you haven’t made a dash for the bathroom to barf as yet, there was another related development announced at the meeting that doesn’t even involve donor animals.

Another scientist by the name of Patrick Brown is making dairy and meat substitutes from plant materials. There isn’t anything new about plant-derived mock meat really, except Brown believes his product will win over “hardcore meat- and cheese-lovers”.

That sounds even more promising, but as always, the devil is in the detail and I haven’t been able to find much of that as yet.

Issues of the treatment of animals aside, our meat eating habits have inflicted terrible damage on the environment. While fake meat may sound off-putting to some dedicated omnivores and carnivores, we need to start seriously considering other options. Heck, we may even need to consider eating insect derived protein.

It’s becoming a particularly pressing issue given global meat consumption is expected to rise 60% within the next 40 years – and we already slaughter billions of creatures a year currently.

Yes, a vegan diet is likely the best option, but it’s not for everyone. However, if all this talk about test tube burgers and eating bugs has suddenly turned you off meat – well, run with that feeling and more power to you.

For the rest of us, even if we could put more effort into reducing meat consumption substantially to buy us a bit more time; that would be a start – because let’s face it, many of us (yours truly included) eat far too much of the stuff.

By the way, if you haven’t tried mock meat in recent years, i