Switchgrass is a hardy grass and dominant species of the central North American prairie. It can attain a height of 6 – 7 feet and is drought and heat resistant.

A farm study by researchers at the University of Nebraska-Lincoln has found switchgrass could produce up to five times more energy than needed to grow, harvest and process it into cellulosic ethanol. Greenhouse gas emissions from ethanol made from switchgrass were 94 percent lower than from gasoline production. 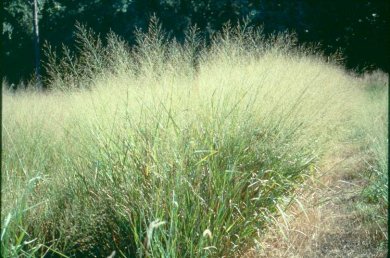 Cellulosic ethanol is a type of biofuel produced from lignocellulose, which comprises much of the mass of plants. Cellulosic ethanol is identical to ethanol made from sources such as corn; but it means not diverting food crops to make fuel. Plants such as switchgrass also require far less water and chemicals in the cultivation process.

Technology to convert biomass into cellulosic ethanol is still at the development stage – currently it takes a great amount of processing to make the sugars available to organisms that are used to create ethanol by fermentation. Six cellulosic biorefineries are being constructed across the United States and are expected to produce more than 130 million gallons of cellulosic ethanol per year.

Where corn grain ethanol biorefineries need natural gas or other sources of energy for the production process, plant biomass remaining after cellulosic ethanol ethanol production could provide the energy required for the distilling process and other power requirements of a biorefinery, further closing the loop on greenhouse gas production.

One of the other very promising aspects of switchgrass is that it doesn’t need to be planted on prime farm land – it thrives on marginal and degraded lands.

This is quite exciting stuff, you can read more about it here.