Farming in the future may feature the use of fleets of small robots to replace the ubiquitous tractor for some applications.

Tractors are the essential workhorses of farmers, but they aren’t without their problems. Aside from emissions, one of the major issues of tractor use is soil compaction. According to the University of Minnesota, the weight of tractors has increased from under 3 tons in the 1940’s to around 20 tons today for the large four-wheel-drive variety.

When soil is compacted, it affects its ability to soak up water and also to drain. While compacted soil can assist in seed germination, it can then impede root growth. A sizeable chunk of a field or paddock can be affected in this regard; reducing overall yields in the medium term.

Another issue with tractors and standard peripheral equipment such as weed sprayers is a “shotgun” effect is used. Herbicides are often applied as a blanket treatment – this leads to a great deal of waste and environmental issues of its own.

SwarmFarm Robotics believes robots have the potential to “flip modern farming practice on its head”. The company, working with the Queensland University of Technology and the Australian Center for Field Robotics, has been set up to research and develop the capabilities of autonomous farm machinery.

SwarmFarm sees a future where farms will have a fleet of robots; costing around the same as a single tractor in terms of overall cost of ownership.

One of the early developments is Queensland University of Technology’s  AgBot, which can navigate a large field using low-cost sensors. While it has seating for an operator, it is designed to operate autonomously. Agbot’s mission is to “seek and destroy” weeds, causing minimal damage to soil as it does so. 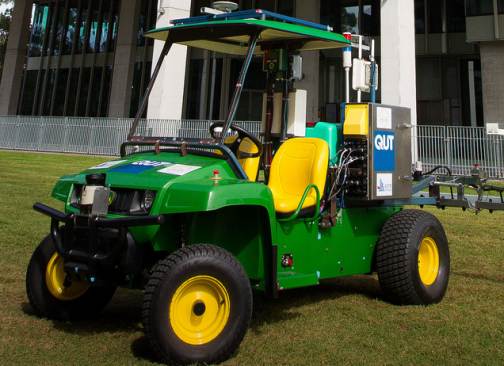 One of the big advantages of AgBot is that it can be sent out into the field soon after it rains; when a full sized tractor would tear up the land and perhaps become bogged. As eradicating weeds when small requires far less chemicals, the QUT says the use of AgBot will lead to substantial financial and environmental savings.

With the potential for robots such as AgBot to be fully electric and recharged via solar panels; farming can become even greener.

You can read more about the SwarmFarm concept on The Land.

QUT’s AgBot shouldn’t be confused with another robot of the same name developed by Louisiana State University (LSU) in 2008. LSU’s AgBot was a solar powered prototype designed for lawn maintenance and security.