Necessity is the mother of invention they say and while the state of the planet is of huge concern, the environmental crisis we face is certainly spurring on some amazing innovation in the field of renewable energy systems. Take for example this very interesting contraption – a vertical axis wind turbine embedded with solar cells. So if the sun’s shinin’, but the wind ain’t blowin’ – you’ve still got juice; and vice-versa. If you have both; even better.

The 5 kW Bluenergy Solarwind™ Turbine‘s double-helix curved wind vanes are mounted on a vertical axis and covered with solar cells. Instead of using glass, the cells are covered with clear Teflon (uh-oh, but more on that later). 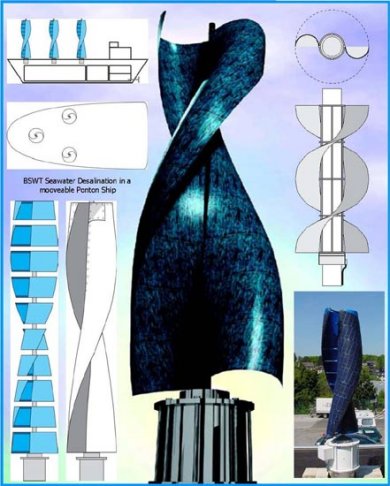 The manufacturer states the turbine will generate electricity in breezes as low as 4 mph and is designed to produce power in winds up to 90 mph; speeds far higher than horizontal axis turbines are able to operate in. It’s also reported to be silent in operation. An interesting point is that when the wind is blowing, the solar cells are cooled by the rotation, which is said to assist in maximum electricity generation.

It’s quite an imposing structure, standing at around 18 feet high and 6 feet wide but given the design I guess for some it would make an interesting artistic statement as well as being a source of electricity. There’s something very “2001: A Space Odyssey” about it – the monolith scene the beginning of the movie.

This isn’t a cheap power source by any means in terms of initial outlay. You’re looking at around USD$35k to have a SolarWind turbine installed and the total cost over its lifetime (25 years  ~ 330,000 kWhrs) is estimated to be around USD$42k – that includes replacing one small generator.

According to Bluenergy Solarwind™ site, that would put the payback period at around 18 years for an installation in New Mexico without any subsidies taken into consideration. With renewable energy rebates taken into account, it could be as little as 10 years. The cost averages out to 13 ¢ / kWhr down to 8¢ / kWhr with full subsidy. The figures are based on installation in an area with an annual mean wind speed of 14mph.

Even at 42k, from what I understand from the info provided on the site, it’s still cheaper to purchase an installation such as this than to buy a wind turbine and panels separately as a 50/50 setup.

Regarding my “uh oh” about the Teflon – perfluorooctanoic acid, or PFOA – is used to make compounds called fluoropolymers, which are then used make Teflon. An EPA advisory board of scientists unanimously recommended PFOA be labelled a ‘likely carcinogen’ in 2006. The makers of Teflon, DuPont, claim they cannot make Teflon without perfluorooctanoic acid at this stage. PFOA doesn’t break down in the environment – ever; and is now widespread in low levels in the blood of the general population.

Still, it’s great to see these sorts of innovations and hopefully a more environmentally friendly coating will be used soon. By the way, BlueEnergy are also into solar roof tiles – another great idea!