Mount Kilimanjaro was made famous in the western world by the acclaimed writer Ernest Hemingway who wrote the short story “The Snows of Kilimanjaro” in the 1930’s.

When you think of Africa, snow is usually one of the last things that comes to mind, but Mount Kilimanjaro in Tanzania had a substantial snow and ice capped peak for over 11 thousand years. I say “had” as it’s rapidly disappearing. It’s yet another example of how something so permanent has fallen victim to man’s destructive ways.

Here’s how Mt. Kilimanjaro looked in 1993 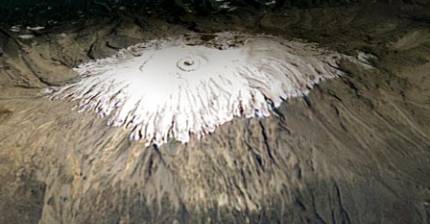 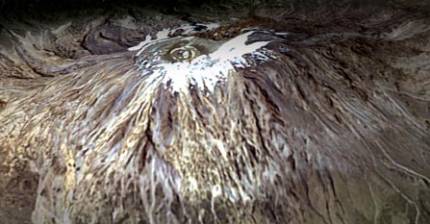 Both images above are courtesy of NASA’s Earth Observatory. Click here for a larger view (opens new window)

Since the latest photo was taken, the snow and ice has retreated even further. In the last one hundred years, it’s estimated the ice cap volume has dropped by more than 80% and most of that loss has occurred since 1970.

The remaining glaciers atop Mount Kilimanjaro are expected to disappear within the next 20 years.

Mt Kilimanjaro’s importance far exceeds a nice photo opportunity or inspiration for a novel. The ice cap was incredibly important to the surrounding area and is also a source of water for the river Nile. Many villages depend on the snow and ice melt water. Animals on the plains surrounding the mountain are now dying and many plants are also at risk.

While there’s still some debate amongst the scientific community as to what is causing the receding ice; the general concensus is global warming related climate change. Again.

It’s an odd distinction our generation and the next generation has – being witnesses to some of the greatest global environmental upheavals for millions of years; and perhaps a “privilege” that we’d prefer not to have. Who would have thought that a single animal, man, could exact such a toll so quickly across the entire planet; even in areas we’ve barely set foot on.

How will our children’s children judge us?