I like cheese – in fact, I could easily live on it; as long as I had oregano, tomato paste and a nice pizza base to go with it. But a recent cheese incident had me somewhat gagging and feeling awfully guilty.

I eat cheese sans pizza regularly also, I love the huge varieties available. I was offered a new chive and onion cheese spread a few days ago and eagerly said “yes please!”. Then I saw it came in a tiny tub, a really nasty piece of convenience packaging that held only 40 grams (1.4 ounces) of product. I think the tub nearly weighed as much as the cheese! 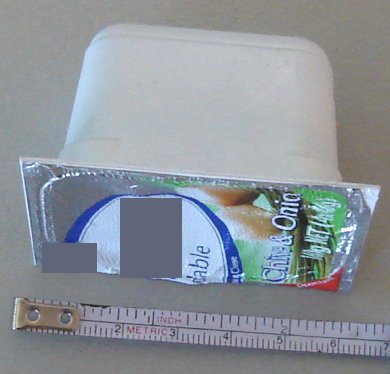 Oh well, tub was already open; so I scoffed it down and comforted myself with the fact I could at least recycle the tub.

Since publishing my article Recycling by numbers, I’ve been more aware of checking the resin code number stamped into packaging and other plastic items before throwing them into the recycle bin.

The number stamped into the tub was “7”

7 is a bad number – recyclers don’t want the stuff. It means it could be made from any sort of a combination of plastics. Now, while I assume the the tub was “safe” to hold the food (I hope), the garbage bin I bought on the weekend was more environmentally friendly (resin code 5). I couldn’t believe it!

I wrote to the company to compliment them on the taste of the product, but to relay to them while convenience packaging was bad enough from an environmental viewpoint, packaging food into a type of plastic that couldn’t be recycled nearly bordered on evil.

I received a polite note saying “your concerns have been forwarded, blah blah blah”. I guess that showed them. Hmm.. probably not. Anyhow, while my single note may not achieve anything on its own, I have found before when taking a similar singular action that many, many others were doing the the same and the company has listened. Spend a minute and speak up, it can make a difference.

You can also avoid the trap I fell into by getting familiar with the resin code numbers and checking before you buy or consume a product – Recycling By Numbers.