I know I rattle on about the Murray River a fair bit; but it’s such a environmentally important, agriculturally crucial and iconic Australian waterway.

Previous to living in South Australia, I spent many years on the South Coast of New South Wales. It was a totally different landscape – very green, lots of creeks and waterways. South Australia is beautiful, but it’s a dry, rugged beauty.

A waterway with water in it is somewhat of a rarity in these parts. I recently travelled 180 km and for the whole trip, only crossed one creek with (stagnant) water in it.

The Murray River is so important to this state. Unfortunately, South Australia is at the end of the Murray River system, so once all the other states get their bit out and pour a bit of their crap in; what we’re now left with is nearly nothing and quite saline. The river is literally dying from the bottom up.

On August 10, a silent vigil will be held on Hindmarsh Island bridge. It will be a demonstration of public anger over the river’s fate. The tragic thing about all this is it’s not a bolt from the blue. I remember visiting South Australia 25 years ago and warnings of the state of the Murray being sounded back then.

This photo of Hindmarsh bridge was taken just 8 months ago. Hindmarsh island is located in the lower Murray River near the town of Goolwa, South Australia.: 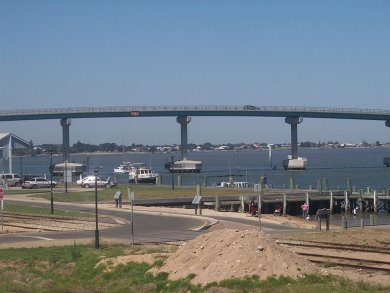 The water was low then as you can see, but according to this article which contains some further information about the upcoming vigil; the bridge now basically stands in mud.

I was last there about 2 years ago and it’s hard to believe that all that water gone. The area boasted the largest freshwater marina in the Southern Hemisphere. Not too far away is the Coorong, a national park containing a maze of waterways made famous by the movie Storm Boy. It too is rapidly drying up. Animals and plants are disappearing – as are people.

We take so much from the Murray and dump so much crap into it – this may be our last chance to turn things around before unique ecosystems, not to mention communities, scattered along its length are lost forever.