I’ve written about seed bombs aka seed balls in the past – they are basically just a lump of clay mixed with compost embedded with seeds and used a “guerilla gardening” tool to help beautify vacant lots and median strips. Lob them into a spot that needs a bit of greenery and then let the rain do the rest.

If you’re not up to making your own seed bombs, stick a quarter into the Greenaid seed bomb vending machine and one will be provided, ready to go. 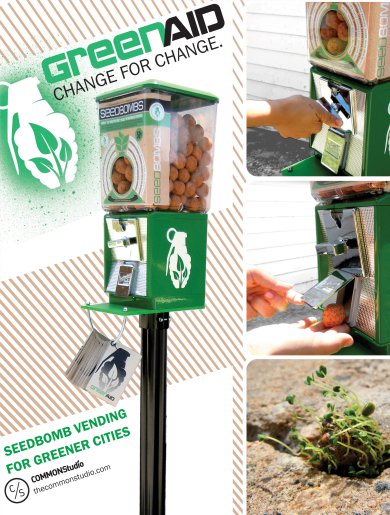 The people behind this machine are TheCommonStudio. You can purchase a machine from TheCommonStudio and they will develop a seed mix, along with what they call a “strategic neighborhood intervention plan in response to the unique ecologies of your area”. I assume this to mean the right seed varieties winding up in the right places as non-native plants in the wrong spot can become invasive species.

Greenaid suggests environmental groups can use it as a fundraising tool,

My only concerns with the machine is a) given how much it looks like a candy dispenser, the young ‘uns might actually try ingesting the seed bombs and b) kids using the seed balls as real “bombs” to create havoc – but if they are that way inclined (throwing stuff at people or places they shouldn’t), I’m sure they’ll find other things to do it with. As for eating them, I guess they’ll figure out pretty quickly seed bombs aren’t really good as candy.

GreenAid looks to be a fantastic tool for raising awareness about the need for (the right kind) of urban greenery – it will certainly capture the attention of kids – and through them, their parents.