Sam, the koala that captured the hearts of millions of people around the world, has died.

The koala became a megastar after being rescued during Australia’s devastating bushfires in February of this year.

The wild koala, in among the blackened and smoldering remains of bushland, was approached by a CFA volunteer firefighter who offered the animal a drink. The koala’s thirst was so great, she not only accepted the drink, but gulped 3 bottles of water; holding on to her rescuers hand as she did so. 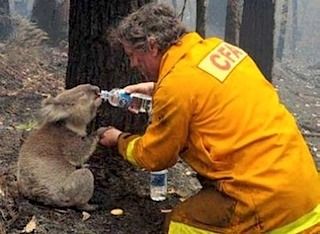 Sam was taken to the Southern Ash Wildlife Centre for treatment for second-degree burns to her paws.

Sam was due to have surgery today to remove the cysts but it was discovered Sam had severe changes in her urinary and reproductive tract that were non-operable and she was put down a few hours ago.

Sam’s death isn’t just another sad case of an animal unfortunately passing away; she represented hope for many people during the disaster; of life clinging on in amongst total and utter destruction.

However, even some good could come from Sam’s passing – to draw attention to the plight of koalas in this country.

In 1788 the Australian Koala Foundation (AKF) estimate there would have been 10 million koalas in this country, now it’s thought that fewer than 100,000 koalas exist. The drop in population is not only through diseases like Chlamydia and bush fires, but through human encroachment on koala habitats.

It’s even sadder that in some places in Australia, concentrations are so intense in small areas that culling of koalas has been considered.

Sam’s death also highlights the fact that many animals injured in the bushfires are still being nursed back to health – if you can spare a few bucks, the Southern Ash Wildlife Shelter is still requesting donations to help in the rehabilitation of koalas in their care.