Purple carrots – caused by a mutation due to toxic chemicals? Not at all (thankfully) – the orange carrot we buy in stores is only one of many different varieties and it seems that we have the Dutch to thank for the sweet root vegetable so commonly consumed today.

Here’s a look at some different carrot varieties still around today you may have never seen before – I never realized that so many existed! 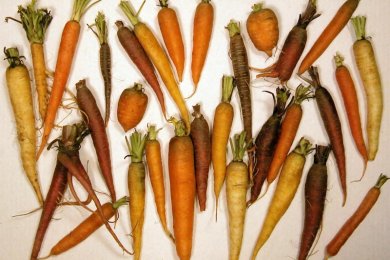 This is one of the problems of our supermarket driven food consumption. We seem to get this increasing amount of junk food to choose from and less variety of traditional food crops. I remember when the biscuit section in major supermarkets were quite limited in comparison to today. Same goes for ice cream, chocolates etc.

This focus on providing huge varieties of junk and less of fruit and vegetables poses a significant threat – so much so that a “Doomsday Seed Vault” has been built to store seeds of all crops from our agricultural heritage in order to ensure crop biodiversity in case of disaster.

There’s already been a number of significant disasters in recent history due to over reliance on just a few species of a crop type – for example, the Irish Potato Famine and more recently the southern leaf blight fungus that wiped out many corn fields in the USA in 1970-71.

It’s a little naive to entrust the future of our food crops to agricultural companies and a single vault controlled by others – the average veggie gardener can help preserve species (and improve their own food security) by planting heirloom and heritage seeds.