A string trimmer or weed whacker, more commonly known in Australia as a whipper snipper, can be a messy, smelly tool. Most have two stroke engines and burn an oil-gasoline mixture; which causes them to emit a lot of smoke and greenhouse gas emissions.

Bill from BioTexLabs in the USA tapped me on the shoulder yesterday about an interesting development in the world of lawn trimmers – the Lehr Eco Trimmer. BioTexLabs are the distributor. 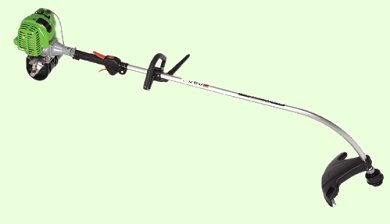 What makes them “green” aside from the color? For starters, they don’t use gasoline – the fuel comes in standard propane canisters. That does away with the gas/oil mixing and replaces it with a fuel system that you simply screw on.

I asked Bill if the cartridges were recyclable and he said that they are, but the owner can also refill them from their BBQ tank (they can’t be filled at your local propane refiller). Lehr is also producting a refillable bottle that can be recharged at any hardware store that fills propane.

According to the BioTexLabs web site, the advantage that propane gives these trimmers is a 96% reduction in toxic emissions, 99% less particulate matter and 60% less smog forming chemicals. The Lehr Eco Trimmer exceeds 2011 EPA standards by 64% and the system is 50 times cleaner than a 2 stroke gasoline engine.

Powered by a 25cc 4-stroke engine, the Eco Trimmer claims to offer a lower operating cost and 2 to 3 times longer engine life over normal 2-stroke engines. The purchase price is comparable with other quality trimmers.

Given the propane fuel, these trimmers also don’t have the common problems of gas powered models such as clogged carburettors and fouled plugs. If you’ve ever tried starting an old trimmer up on a cold morning you’ll know what I mean – gasoline models do take a bit of maintenance.

The Eco Trimmer is now available in the USA and in Canada. I look forward to seeing them hit Australian shores.

Now, if someone could just do something about the horrid noise that all trimmers make :). Being 4-stroke, it’s possible that the Eco Trimmer may be quieter. Has anyone seen/heard these in operation?