I never was much of a fan of creepy crawlies until I started working with composting worms. They didn’t particularly repel me, but I just didn’t find them to be attractive, even bearing their importance in mind.

That’s all changed – I now think worms are beautiful creatures and I can even see beauty in blowflies – something we have plenty of here. It may not be a fuzzy koala bear sort of cuteness (btw, koalas can be cranky and smelly critters), more a beauty grounded in awe of nature’s intricate designs.

One of the challenges of preserving biodiversity is the cuteness factor. The plight of the panda gets a lot of attention and dollars, but what about something like this: 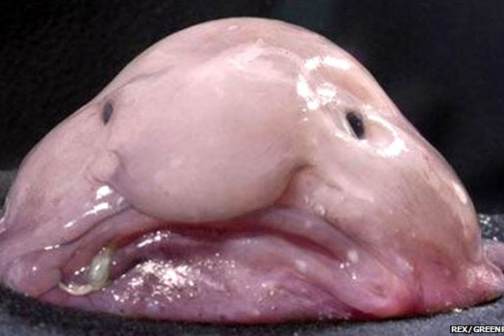 That lovely looking fellow is the blobfish – recently voted as the world’s ugliest animal by the Ugly Animal Preservation Society.

The blobfish lives at depths between 600 and 1,200 metres off the Australian coast – the pressure at that depth is enough to crush most creatures. Gelatinous in nature and with a density slightly less than water; it’s not the most athletic of fish – it mainly sits on the bottom or floats just above it waiting for prey to come into range.

There are fears for the blobfish’s survival due to deep-ocean trawling. I know from first- hand experience that bottom trawling is incredibly destructive as I used to work on trawlers. The practice rips up the bottom and scoops up everything in its path not fast enough to swim away. Even with the zippier creatures, the clanging of the metal boards and ground gear on the ocean bottom helps drive the fish into the maw of the net; which is hidden by the cloud of muck stirred up.

I saw many weird and wonderful aquatic animals during my fishing years – many, many thousands of creatures that I would unceremoniously shovel over the side – dead or dying – as they were “trash”.

As ugly or inedible they may have been, I have since learned they are anything but trash. All play their role in an aquatic ecosystem; all are valuable – and all these species should be preserved unless natural processes dictate otherwise.

For a look at another less-than-pretty animal (in my opinion), one I’ve had the umm.. pleasure of handling, check out my post on the hagfish (you might want to put down that sandwich first if the blobfish pic hasn’t already motivated you to).