One of the questions I’m most often asked is “how do I recycle polystyrene?” (also known as Styrofoam). Polystyrene recycling is a particularly thorny issue as it’s such a light material that takes up so much space; therefore the economics of reclamation is quite a challenge. Here’s a story about a young Aussie guy doing something to address it:

At the ripe old age of 22 Chris O’Brien had a brilliant idea.  Against all odds and with almost no money at his disposal he managed to turn his idea into a machine called the “Hungry Giant” that would change the waste removal industry in Australia forever, and significantly reduce the amount of waste such as polystyrene going to landfill. 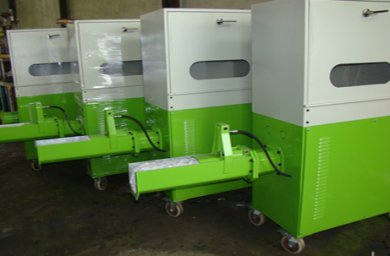 Chris was working for a white goods store when his idea struck.  He saw truckload after truckload of polystyrene packaging materials removed regularly from the store and taken to landfill.  Chris knew there had to be a better way.

By the time he was 23 Chris had developed a machine he called The Hungry Giant that could compact polystyrene on site.  Because it is 98% air, a great amount could be squashed into small solid blocks that could more easily be recycled and fewer trucks were required to remove it.

“It seemed crazy to me that a lot of waste being sent to landfill is actually recyclable.” Chris says.  “The entire industry was based on volume when it should really have a commodity focus.”

Until this time commercial waste removalists had typically taken both the recyclables (cardboard, glass, paper, plastics etc) and the non-recyclable rubbish away without compressing onsite.  This means many more pick ups than is really needed.  The cost to business is unnecessarily high and in some cases, the positive environmental effects of recycling are futile when compared to the additional carbon released from all the extra removal trips.

But not everyone in the waste industry is happy about Chris’s invention and his determination to ‘clean up’ the industry.  “Traditional waste companies love the old system because they get to charge for every cubic metre of waste generated, even if it hardly weighs anything.  They’ve been making a fortune!  Australian business and the planet have been paying dearly for it.”

Frustrated by the lack of initiative of the industry, and determined to show that there is a better way Chris decided once again to come up with his own solution. This month Hungry Giant is launching a revolutionary full waste collection service to not only deliver a way of better recycling that customers are demanding, but to also reduce their waste bill.  Now all types of waste can be separated and volumes reduced at source, not just polystyrene. Chris likes to play fair so only the waste that cannot be sold on the commodity market is charged to the client.  “Why should they have to pay to have it removed if I can make a buck out of it?” Chris explains.

National retailers like Harvey Norman and The Good Guys use Hungry Giant machines and have reported great financial savings and a much reduced environmental impact.

This young Aussie entrepreneur is being hailed as the ‘green face of recycling’.  He is not afraid to take on the big boys, and by cleaning up the waste industry he is creating a better deal for both Aussie business and the planet.  Not bad for a 26 year old!  Imagine what he’ll achieve by the time he’s 30!