Plastic is everywhere we look. I’m looking at it right now (my notebook screen) and as I type, my fingers are hitting keys made of plastic material. It’s really changed our lives in such a short span of time. While incredibly useful, plastic also presents all sorts of environmental issues.

One is the fact that many types of plastics don’t break down readily and cannot be easily recycled. Something as simple as a disposable pen will be with us long after its ink has run out as will a toothbrush after its bristles aren’t much good for anything but cleaning.

Artist, author and inventor Benjamin John Coleman contacted me yesterday to let me know about a really interesting innovation that addresses these issues. He has developed a  material made from newspaper that can serve as an alternative to plastic in many applications – including pens and disposable toothbrushes. The material dubbed “Makigami” is made by tightly rolling paper soaked in a water-based solution. 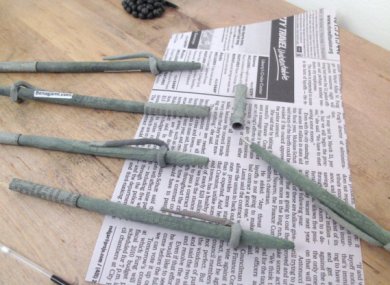 Makigami-based pen bodies are not only made from a renewable resource or a waste product, Benjamin states they only take 3 months to decompose once disposed of, can be recycled, require 1/10th the energy to produce compared to their plastic counterparts, have 1/1000th the petrochemical content and would cost only 1/10th that of plastic pens to mass produce.

It sounds like a winning idea all round – for consumers and disposable pen companies alike. Learn more about Makagami at  www.OrigamiBonsai.org. You can also download a press release (PDF) which explains more about Benjamin’s invention and how he came to stumble upon it.