Born in the late 60’s, I only have very vague memories of the 70’s oil crisis. I do remember an instance of my parents complaining about the price of petrol (gas) as we approached a service station and what the board read – 29.4 cents a liter (about USD $1 a gallon), but I think that was in the late 70’s. Still, it was far cheaper than what we are paying now – about 4x the amount.

A very interesting exhibition was recently launched called “Sorry, Out of Gas“. The intro says it all:

“The crisis we are facing in the year 2007 has all the features that emerged in 1973. However, today’s energy problem is accompanied by a heightened environmental crisis that is plain for all to see”

Unlike the 70’s where it was a political issue, the shortages we face today are simply because we’re starting to run out of the darned stuff (see my post on Peak oil and Hubbert’s Peak); or should I say, what is left is harder to get to and that again relates back to the environment. A good example of this is the extraction of oil from tar sands in Canada.

Did you know that way back in 1979, the White House had solar panels installed? 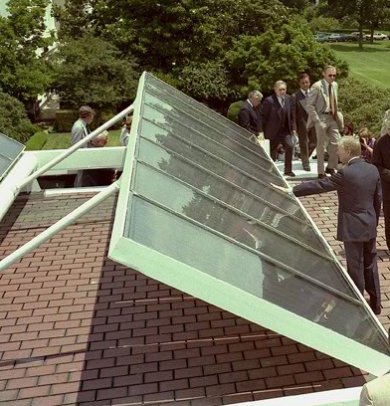 Jimmy Carter also offered tax credits to anyone who purchased solar energy systems. Guess who pulled down the solar panels? Ronald Reagan, who also pulled the tax credits scheme. As a result, many people in the solar industry went broke. Who knows where the renewable energy industry would be today if Carter’s vision had been pursued.

“Those who forget the lessons of history, are doomed to repeat them” (George Santayana?).

While we have forgotten some of the lessons of the 1970’s oil shock that we are doomed to repeat, “Sorry, out of gas” is a collection of photos from the past about sustainability offering positive lessons that we are finally now re-learning in a big way; hopefully to never forget again. The future of “civilization”, such as it is, depends upon it.