If you’ve been reading Green Living Tips for a while, you’ve probably seen mention of Niki The Wonder Dog, Guardian of the Blessed Solar Panel.

Niki’s around 7 years old now – and like many of her breed (fox terrier) she loves to run. She’d break into what we call the “crazy run” regularly, running around in a large circle as fast as she could for no apparent reason, just for the joy of it.

When I recently acquired my outback property, she was in heaven! She could run and explore without the restrictions of a lead or fences… and sometimes discovering odd and potentially venomous critters of the bush in her forays. 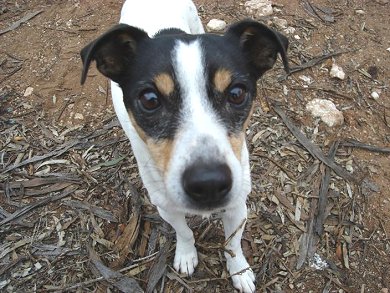 Guardian of the Blessed Solar Panel
Hard at work as always

Unfortunately, a month or so ago, she started holding up one of her hind legs a great deal, hopping around for most of the time on three legs. Even when the leg was down, we could see she was feeling some pain.

We thought it was the return of an old “crazy run” strain injury; but it didn’t get any better. After taking her to the vet, it seems it’s arthritis – the flare up coincided with the cold weather.

The vet gave me a prescription for some anti-inflammatories and some information about managing the condition. It was very sad as it likely meant the end of our 5 mile walks while out in the boonies. It made me realize just how quickly the 7 years had passed and that Niki was now, like me (eeek!) middle aged.

Anyhow, among all the information the vet provided was a leaflet on a product called “Sasha’s Blend“. According to the site, it contains 100% all natural marine concentrates and works at the site of joint problems by treating the illness rather than  the symptoms. I can vouch for the “marine concentrates” as when you take a sniff up close, the stuff smells like one of the shark longline boats I used to work on :).

There’s a really interesting story behind the product, which can be viewed here.

While it’s not cheap to buy, only a small amount is used daily, so it lasts for ages. We decided to give it a whirl; after all, Niki is a treasured companion.

We let her finish her prescription of inflammatory medicine first and at that point there was no improvement at all; so we were really concerned and I wasn’t all that optistic about what some ground up shark cartilage (or whatever it is) could do. The inflammatory meds should have had at least some positive impact within a couple of days.

We started her on Sasha’s Blend and within a week, she had stopped holding her leg up, pretty much lost the limp entirely and was running around like always, even though it was still very cold; which should have caused her problems. Additionally, she seemed so much happier. I was concerned that the day after her burst of energy, she’d really feel it; but the next day she was fine.

While I can’t say definitively that it was Sasha’s Blend responsible for the marked improvement; it seems to be the only thing it could have been – and it’s great that this product isn’t a mishmash of laboratory produced pharmaceuticals, but totally natural. I’d hazard a guess (and this is just my guess) it’s made from seafood waste (dried and ground up shell, cartilage and “bone”) – so it’s waste that’s being put to very good use.

I also noticed the company is currently working on a Green Policy to minimize their carbon footprint throughout all aspects of their operations. It’s great to see so many companies starting to think a little more about the environment.

If there’s any change for the worse in Niki’s condition, I’ll update this post – but right now, she is resting comfortably in front of the wood heater; likely dreaming of the adventures she’ll go on tomorrow :).