I’m always thrilled to see butterflies in our area as they seem to be fewer and further between these days – apparently it’s a global phenomenon. I’ve always especially loved the amazing colors and patterns of the Monarch (Wanderer) butterfly.

I thought that aside from being native to North America, they were also an Australian native – but it turns out they didn’t establish themselves here until the late 1800’s when milkweed, a primary food source for the butterfly, also became established.

I’ve seen quite a few about the place over the last couple of weeks – snapped this photo in our front garden a few days ago: 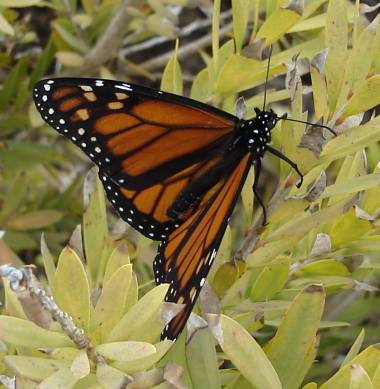 Just before dark last night, I was sweeping around the house and nudged something I thought to be an oddly shaped leaf. It turned out to be two Monarch butterflies mating: 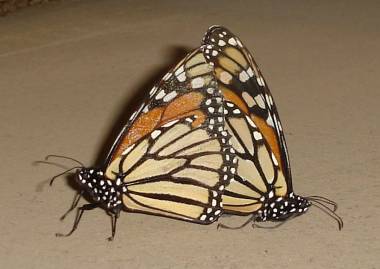 Given their delicate wings, they were lucky to survive the broom. Even after accidentally hitting them, it didn’t deter the butterflies from their activity. They didn’t miss a beat – now that’s what I call focus :). 18 hours later and they are still out there, albeit separated. I guess they are rather exhausted and need a bit of time to recuperate!

It’s interesting  they are mating in July which is winter here in Australia. From what I understand, they usually don’t mate until spring – another symptom of global warming perhaps?

During the cooler months adults sometimes gather in their thousands and hang from trees in a phenomenon called overwintering. There’s an overwintering site close to us (Adelaide, South Australia) in the Mt Lofty Ranges. In North America, the Monarch Butterfly travels incredible distances during seasonal migration – up to 4,000km (nearly 2,500 miles) between the southern United States and southern Canada. The Monarch can have a lifespan of over a year.

The Monarch’s relationship with milkweed is fascinating – it not only serves as a food source, but also provides them with a defence mechanism. The milkweed sap they feed upon contains a cardiac glycoside toxin that deters most predators from consuming them. Eating a Monarch butterfly can make animals violently ill; although two local bird species, the Pied Currawong and Black faced cuckoo Shrike, have been observed feeding on them without any negative effect.

Just on a tangent – milkweed have their seeds in large pods which contain soft filaments known as floss. This floss has insulation properties superior to down feathers and milkweed floss was used extensively in the United States during World War II.  Unfortunately, milkweed is somewhat of a pest in this country.

Anyway, it was wonderful to see these creatures, it’s another (albeit premature) signal of spring and I believe it’s thanks to our neighbors who have milkweed growing in their garden that I have the privilege of observing this beautiful butterly.