George wasn’t any run-of-the-mill 100+ year old giant turtle. He was the last of a subspecies. His death is but the tip of the extinction iceberg; one of the hundreds of thousands, perhaps millions of species we’ve played a role in or been fully responsible for wiping from the Earth.

George was taken from the island of Pinta, part of the Galapagos Island chain, in December 1971. It was an act of kindness as the island had been overrun by feral goats that consumed the vegetation George’s sub-species relied on. By that time, he was already the last of his kind (Chelonoidis nigra abingdoni).

George was taken to the Charles Darwin Research Station, located in Puerto Ayora on Santa Cruz Island where he spent the remainder of his life.

George’s keepers had tried to mate him with females from different species, but the efforts failed.

The cause of his death is unknown and while old age may seem the obvious answer, giant turtles can live for hundreds of years. The Galapagos giant tortoise can reach weights of over 400 kg (880 lb) and attain a length of over 1.8 meters (5.9 ft). George was a featherweight at 200lbs.

These tortoises consume plant material including cacti, grasses and leaves – and a lot of it; averaging 32–36 kilograms (70–80 lb) per day. 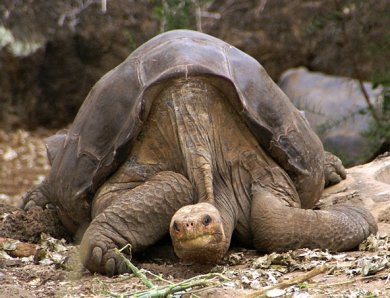 That yet another creature has been obliterated by man’s activities is tragic, particularly given our track record. We are in the period of the Sixth GreatExtinction. 27,000 species of plants, animals, insects, fungi and bacteria are being wiped out each year – just from tropical forest habitats.

This is so incredibly sad, but if any good can come from George’s death, maybe it will be a renewed focus on the plight of the creatures we share the planet with who are under threat from ourappetite for destruction.

Learn more about the 6th GreatExtinction.