With Peak Oil upon us and more importantly, global warming related climate change partly due to fossil fuel consumption, the idea of liquid coal fuels coming into common usage sends shivers down my spine.

The US coal industry is pushing for (taxpayer) investment into technology for converting coal into liquid fuels – and not in a small way. Each plant would cost somewhere around the $10 billion mark.

Coal is abundant, but the problem with creating this sort of fuel is that it’s a energy and resource intensive process. Emissions from coal liquid fuels are around 50 pounds of carbon dioxide per gallon -nearly twice as much as gas.

According to the Sierra Club, to replace only 10 percent of USA’s transportation fuels with liquid coal, coal mining would need to increase by over 40 percent. A Sierra Club report on the topic states that driving a hybrid on liquid coal fuel creates as many emissions as a Hummer H3 running regular gasoline

Previous estimates showed the United States to have enough coal to meet projected energy needs for almost two centuries, but that was based on consumption rates at the time. Liquid coal would rapidly deplete reserves and again America would be looking to overseas to meet its needs- places like Australia; which is the world’s leading exporter of coal.

Additionally, coal mining is incredibly destructive. In some instances, entire mountain tops are removed, valleys filled in and waterways contaminated. 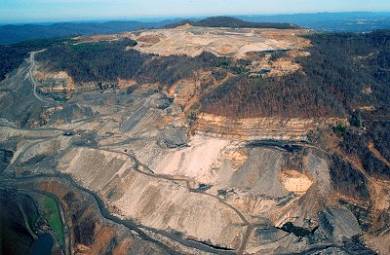 The NRDC (Natural Resources Defense Council) has put together a petition to tell Congress to say “No” to the liquid coal industry as both the energy bill and the farm bill both currently contain liquid coal provision – learn more about the petition here.