With an output capacity of six megawatts, German company Juwi solar has opened the world’s largest solar power plant to use thin-film modules. 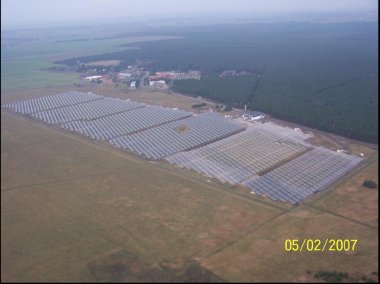 Thin-film are cheaper than crystalline modules and produce more energy per unit; good news for those of us contemplating a solar setup for our own homes soon as these modules start becoming increasingly available.

The company isn’t stopping there. Juwi is constructing a massive 40 megawatt solar plant elswehere that will consist of over half a million thin-film solar modules and cover an area equivalent to 200 soccer fields.

The land usage can be a bit of a concern to some people, but when you consider the roof area in an average city and the fact that an average house roof can provide enough surface area to host a solar array to power a residence; this is a direction our governments should be moving in.

The Germans are world leaders when it comes to solar power. The country has some 300,000 solar power arrays installed, outputting in the vicinity of 2,300 megawatts. Germany and Spain are also leaders in wind power; currently representing 50% of the European Union wind power market. The EU has set a target of a 35% proportion of green power by 2020 and 50% by 2050 – and it looks like they may achieve that.

Looks like our governments have a bit to learn from the Europeans :).