According to Hell For Leather, weighing just 90kg (198lbs), the bike weighs less than KTM’s own 125cc enduro, but has the torque of a 250cc two-stroke.

While the zero emissions side is very nice as 2-stroke motorbikes emit more greenhouse gases per cc compared to a car, have you ever heard a 250cc two stroke dirt bike having its guts revved out? It’s a noise straight from the depths of hell. It’s brutal and it’s got me beat how some of these bikes are even street legal. 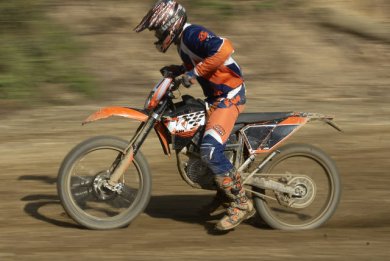 Unfortunately, many dirt bike riders are either deaf from their hobby or just don’t care about the impact of noise pollution, a very underrated issue.

A 250cc two stroke can be clearly heard kilometers away out in the bush and it really unsettles local wildlife (and some humans, like moi).

Environmental issues aside, someone who thinks it’s great fun doing something that negatively affects such a wide area is being rather selfish in my opinion. It’s a really destructive hobby.

The lithium ion batteries used in KTM’s Zero Emission bike give it a range of about 40 minutes under “race conditions.” It’s not a huge range, but it’s a start and it’s still early days in the evolution of electric bikes. According to Hell For Leather, the bike will be “affordable”, but no price range was provided. I certainly hope the price will be reasonable to encourage uptake.

I use a 125cc 4-stroke quad farm bike for getting around my block at the moment. While it’s a lot quieter than a two stroke and more fuel efficient than hauling a full sized vehicle around, it’s still too noisy in my opinion and I limit my use to work purposes only. Electric quad bikes are available, but unfortunately cost around the $35,000 mark at the moment; about 70x what mine cost.

You miss seeing so much wildlife when on a bike compared to on foot and I’m often baffled by hard core dirt bikers who choose to ride two-stroke monstrosities claiming to have an appreciation of the bush.