When the Tōhoku earthquake related tsunami hit Rikuzentakata, Japan on March 11, 2011, the devastation was incredible. Even though the town had a 6.5 metre (over 20 feet) high seawall protecting it, thousands of houses were washed away and many people lost their lives. Buildings were flooded to a level three stories high.

A two-kilometre stretch of shoreline featuring tens of thousands of very old pines was also decimated. Every tree was destroyed, bar one – which was to become known as the Miracle Pine. 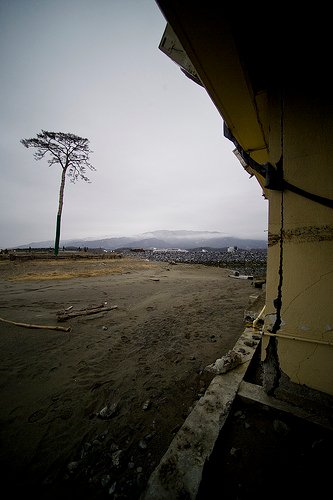 It’s hard to imagine the impact on survivors who returned to the destruction as they witnessed this single tree rising above the ruins. I really can’t fathom how the tree stood up to all the pressure of the water and debris.

The tree understandably became a very important symbol of resilience and hope after the disaster.

Estimated to be somewhere between 200 – 270 years old, the ten metre pine had struggled since the tsunami due to the effects of salt water. While environmental groups and local government attempted to save the tree; unfortunately they were unsuccessful.

While the tree is dead, it will live on in a way – it is being cut into sections and the branches removed with view to preserving and reconstructing the Miracle Pine in the same location. The tree will be reassembled with a carbon spine and set in a concrete foundation.

The Miracle Pine is reminiscent of another hope-amongst-tragedy event in Japan that destroyed much around its epicenter; but this disaster was totally man-made – the bombing of Hiroshima on August 6, 1945. The radius of what was pretty much total destruction was about one mile (1.6 km), but six ginkgo biloba trees within 1.1 – 2.1 kilometer radius from the center of the nuclear blast survived and are still alive today.

This page shows how buildings have been reconstructed around the trees.

(Special thanks to necodrive for allowing me to reproduce the photo above; an image he captured a year after the tsunami).