Also known as the Trash Vortex and a variety of other names, the Great Pacific Garbage Patch exists in the North Pacific Gyre, a clockwise swirl of currents that’s home to little except phytoplankton – and trash. Lots of trash. So much trash that for every pound of plankton, it’s estimated there’s 6 pounds of plastic garbage.

Occasionally, ocean currents will change and release some of cache of garbage, which winds washing up on the beaches around the outskirts of the gyre in huge amounts. Ocean researcher Charles Moore reported the amount of plastics in areas of the gyre to be somewhere around 3.3 million pieces per square kilometer! 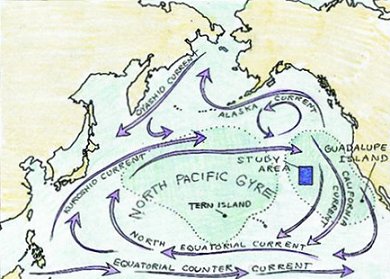 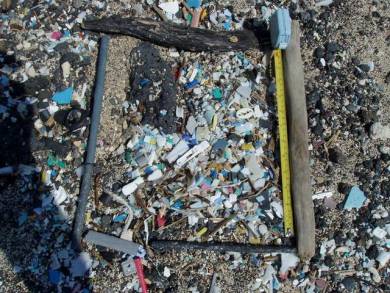 According to GreenPeace, over 20 billion pounds of plastic ends up in the ocean – each year. Plastics are particularly nasty in an aquatic environment; aside from being toxic, they don’t biodegrade, but just break into increasingly smaller pieces that are dispersed widely. These particles can clog the gills of fish and filter feeders.

Also, aquatic birds tend to be attracted to the plastic and ingest quantities that can block their digestive tract – they literally starve to death. Turtles are particularly prone to eating plastic bags and fishing line, especially those species that dine on jellyfish.

The ocean is big; our planet is big – but it just goes to show, it’s not big enough to cope with our modern garbage. We really need to avoid plastics wherever we can – and recycle what we can’t seem to avoid; there’s simply no safe place to dump these items.