The Australian animal that my colleagues in the USA ask me most often about is the kangaroo. Kangaroos bounding down the main streets of our cities is somewhat of a myth – but not in our area. We are very privileged to see these creatures on a daily basis in our slice of suburbia – and sometimes even in our front yard. 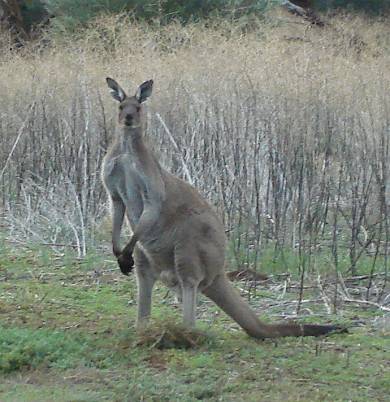 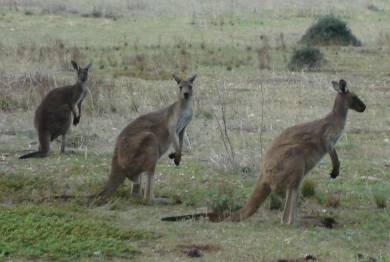 Since there is so much interest in kangaroos, I thought I’d jot down some fascinating facts about these creatures.

– The Australian red kangaroo is the world’s largest marsupial. Marsupials are mammals in which the female usually has a pouch.

– There are more kangaroos in Australia than humans. This is mostly due to the clearing of bushlands for pasture and increased availability of surface water since European settlement.

– There are 45 species of kangaroos and wallabies in Australia

– I’ve seen roos jump fences 5 feet high from a standing start with seemingly no effort! A kangaroo can jump up to 10 feet (3 meters) high with a runup and have a leap length of up to 26 feet (8 meters)

– Kangaroos do “box” in the wild , but their most dangerous defence is to grab onto you with their short front paws, jump, then pump their powerful hind legs into you. Their sharp toenails can cut through clothing and skin like butter. They may also kick by using their tail as a stabilizer instead of grabbing. It’s not uncommon to see male kangaroos fighting each other in these ways during mating season.

– Kangaroos aren’t usually aggressive to humans; but domesticated/semi-tame roos can become so if they have diets high in sugar; for example, bread.

– Some species of kangaroos live in trees!

– Male kangaroos are called bucks, boomers or “old man”; females are does, flyers, or jills, and the babies are known as joeys.

– To get up close to a ‘roo, you can move forward while they aren’t looking and freeze while they are – movement is what will scare them away; but if you stand still, they see you as being part of the landscape.

– Kangaroos can slow down the development of a foetus if the conditions are unfavorable. This phenomenon is known as embryonic diapause.

– A joey’s entrance into the world is a tough one. They are basically born as a foetus, looking very little like a kangaroo and under an inch long. They then have to crawl using their front limbs to their mother’s pouch. The joey will latch onto a teat for the next 9 months before leaving the pouch intermittently. During the joey’s perilous journey immediately after birth, the mother creates a pathway to the pouch by licking down her fur to assist the joey’s movement somewhat.

– Kangaroos can survive on very little water; sometimes going for many weeks without it – most of the moisture they need is gained from their food – grass, young shoots and leaves from certain trees

– Kangaroos aren’t a true ruminant, but they do have chambered stomachs similar to a cow’s and like cows they regurgitate vegetation to be re-chewed (chewing the cud).

– Unlike cows, kangaroos don’t fart! This makes them of particular interest to scientists looking for ways to decrease cow flatulence.The methane produced by livestock is a powerful greenhouse gas and thought to significantly contribute to global warming.