When the Australian government first announced the idea of draining wetlands along the Murray River for drinking water a few months back; I thought it was pure insanity. I was sure there would be time for the appropriate environmental groups to prevent such a thing from happening.

We may have run out of time.

As the drought has worn on, it seems drastic measures are now required to “secure” our water supplies. In my opinion, this security will only be very short term; what is being planned will lead to a very insecure future.

Announced a few days ago, the Australian Federal Government appears to have hammered out a deal with the Victorian and South Australian state governments to build a temporary weir at Wellington, near the mouth of the Murray River, if it doesn’t rain sufficiently within the next two months – and to start diverting flow from wetlands further upstream.

At the risk of raising the ire of proud South Australians, the (once) mighty Murray river isn’t much more than an open sewer in my opinion and has been that way for a long time. Each time I’ve flown over it in the past 6 years, it’s been a sickly green. The river has been hammered so much since white settlement that this latest measure may indeed be the final nails in the coffin of the Murray River in South Australia.

Here’s a couple of relatively recent satellite photos of the river: 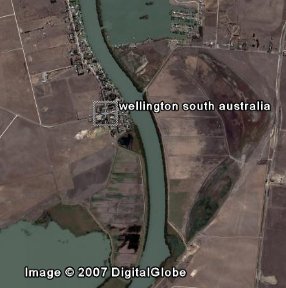 The approximate location where the weir will be
placed (Wellington). This much abused river supplies
the majority of South Australia’s population with water! 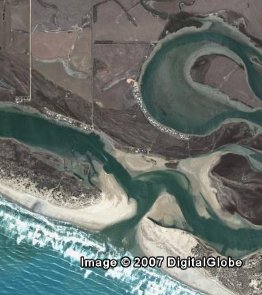 The mouth of the “mighty” Murray river (same altitude)
Basically a trickle! (Both images courtesy of Google Earth)

The Murray River is one of Australia’s longest rivers, meandering through three states and a total of 2,575 kilometres (1,600 miles) in length. It’s one of our national icons, like the kangaroo, and yet we seem hell bent on destroying it.

The Murray River has special importance in South Australia as it provides drinking/irrigation/industry water for the vast majority of the state. South Australia is the driest state in the driest continent in the world, and we have no other major river in this state. Other rivers we do have are in the same condition as the Murray and would be considered mere creeks in other parts of the world.

We take so much from the Murray that for the last 6 years or so, dredges have been needed to keep the Coorong/river mouth open. If it were to close, the Coorong would simply stagnate and die.

We are trying to draw more water, poor quality water, from a river system that has nothing more to give. Drained and diverted upstream wetlands will perish very quickly without sufficient flooding – and we have so few wetlands in the southern states as it is.

As for this “temporary” weir; I don’t think there’s anything temporary about it as it will cost well over $100 million to build. It will disturb the passage of already endangered native fish species and make the wetlands and inlets downstream rather akin to the Aral sea in Russia; a saltpan.

While South Australia has one of the highest rates of rainwater tank ownership in Australia; I think the government needs to extend rebate programs dramatically for existing houses without tanks and to allow homeowners to improve the functionality of existing tank and water catchment setups setups; e.g, plumbing tanks into mains water supplies to the house.

We lose so much water through roof runoff in our cities. When I had my shed in outback South Australia, even though it was a semi-arid region; I calculated the amount of rainwater I could collect from the small roof area over a year was still a staggering 13,000 litres (around 3,400 gallons). Imagine how much water from the Murray could be saved if every house in Adelaide had an appropriately sized and installed tank.

Before we start talking about taking water out of what is already an overstressed river system; we should be also be looking at desalinisation plants. We have a substantial coastline, some of it totally ruined by our other activities; so this is where these plants could go.

South Australia’s water supply issues and the condition of the Murray aren’t just South Australia’s problem. Given there’s two other states that the Murray flows through, they are equally to blame for the issues facing the river. Unfortunately, so much time is spent in political finger pointing regarding the Murray’s woes, it’s slowing down the implementation of real solutions.

If there is no decent rain over the next couple of months and the government is allowed to proceed with their plans, you can be fairly certain this will period will go down in history as one of South Australia’s darkest environmental moments. Even if the rains do come, will we learn from the current situation? Given global warming and the long range predictions for this country; i.e. increased drought, perhaps we need to be on Level 5 water restrictions permanently.