Did you know that of the 7000+ varieties of apples grown in the U.S. just 200 years ago, less than 300 still exist? These varieties are gone forever; extinct.

When we think of extinction, the focus is usually on animals, but many plant species, including important food crops face the same threat. Did tomatoes really taste better when we were kids? While aging does dull our sense of taste, I suspect they really did.

Since the time we were growing up, food crops have been altered and “refined” to suit modern markets. This continual refinement, selective breeding, mutation, whatever you like to call it means that many old world, and even relatively recent varieties of all our fruits and vegetables could disappear from planet Earth. If they disappear, so will their unique characteristics which we may need again some day.

The Svalbard International Seed Vault, aka the Doomsday Vault, will be an ultra-secure facility to store and protect seeds of all crops from our agricultural heritage in order to ensure crop biodiversity in case of disaster. The seed vault will be constructed 120 meters deep into a rock face close to the North Pole. 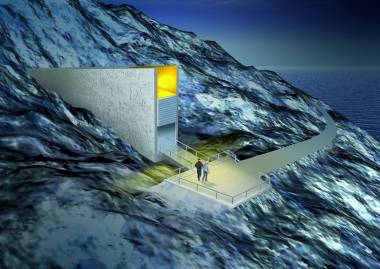 The North Pole has been chosen because of the threat of global warming related climate change. The seed vault will be 130 metres above current sea level, protecting it from flooding should worst case scenarios regarding sea level rise predictions eventuate. The depth of the vault into the permafrost is to protect against external air temperature rises.

It appears there was some talk in the early stages of planning to keep the vault a secret to protect it, but that would have been close to impossible. Instead, the high profile of the installation among the local community may help to protect it. Internal security features include reinforced doors,no windows and video monitoring.

Construction of the Svalbard International Seed Vault will commence in March 2007 and completed in September 2007, with the official opening of the facility in winter 2008.