Chances are you’ve never heard of the Indian islands of Lohachara and Suparibhanga. Chances are you won’t hear much more about them after the initial press flurry has died down.

Once home to around 10,000 people, Lohachara island has slipped beneath the ocean and it’s neighbor, Suparibhanga island, met the same fate a while back. 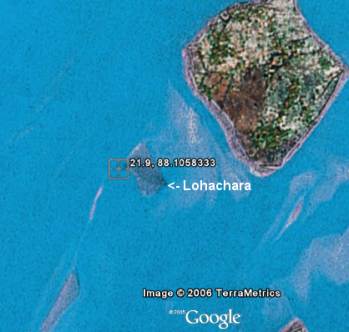 The culprit wasn’t earthquake, volcanoes – it was man. Although the Bengal government state the  islands were eroded by ocean currents, not by rising sea levels, scientist familiar with the situation state that global warming induced climate change raised sea levels and made the islands uninhabitable. And let’s say it was ocean currents – what changed so quickly and why? Even if it were the case, I think there would still be a major link to global warming.

The destruction is not going to stop with Lohachara and Suparibhanga; the majority of a large nearby island, Ghoramara, is also under water and a dozen other islands in the Sunderban chain, where the Ganges and the Brahmaputra rivers flow into the Bay of Bengal, will suffer the same fate.

According to Sugata Hazra from the School of Oceanographic Studies at Jadavpur University, 15 per cent of the islands could be rendered uninhabitable in the next few decades, forcing the evacuation of 70,000 people. 400 Bengal tigers are also in danger.

The particularly unsettling thing about rising sea levels is that scientist continue to revise their estimations for the rate of rise – usually upwards – as they discover new elements in feedback loops not previously considered that accelerate this process.

This is not a drill. This is real. Whether it was rising sea levels or ocean currents wearing away fragile ecosystems, global warming and man is intrinsically linked – it’s yet another sign of things to come if we don’t smarten up – and fast.