Here in Australia, we have a wonderful array of beautiful parrots, including a largish bird called a Corella; quite common in South Australia.

These grow up to just over a foot to 18 inches in length and usually flock together in groups that may consist of thousands of birds. They are real characters and rather noisy critters; but I used to love seeing them around – a splash of nature in sloppy, stinky, “civilization” sodden suburbia.

At this time of the year and over the next couple of months, there were so many of them we had to drive very slowly down our street as they would loiter on the road, seemingly without a care in the world. The minor inconvenience was worth it. 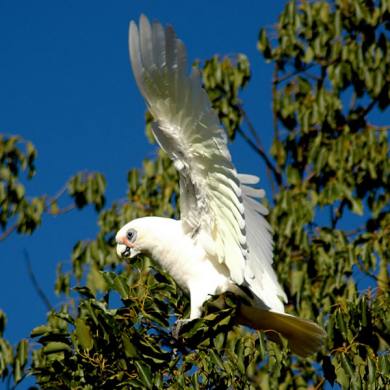 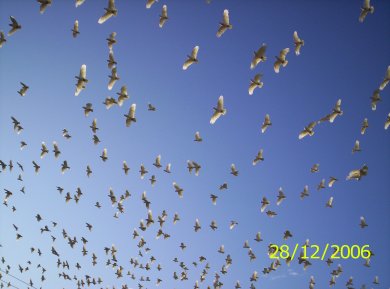 A flock of corellas flying over our house in 2006 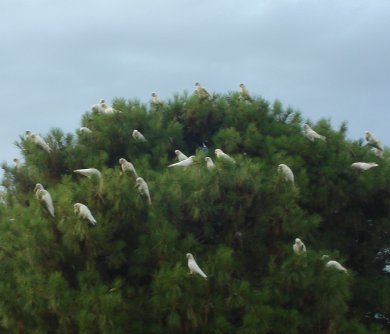 Hanging out in the pines

If you were a paranoid sort of person, you might think they were out to get you at times. We often had them bombing our house with pine cones as they flew overhead and I remember being conked on the head by an accidentally (or not?) dropped pine cone.

Unfortunately, corellas also do their share of damage according to some residents in Adelaide’s southern suburbs – through their stripping of bark off trees and digging up soil; not to mention the terrible, terrible crime of the birds making a bit of noise at night.

While the pine trees (non-natives anyway) always seemed to recover quite nicely from their foraging and we never had a problem with them attacking other plants, they are considered a major pest in the area in which we lived.

This year, it seems major action will be taken; which may include culling :(.

Even if they just decide to move the birds on, where will they go? They’ll just wind up in another neighborhood, annoy people there and the cycle will continue. We get rid of the Corellas and we’re left with what? We’ll still have a stack of sparrows, starlings, mynah birds and other non-natives. Wonderful.

How utterly depressing – the corellas added such beauty and spectacle to the area.

As far as I’m aware, the birds have been flocking in the area for many, many years. It’s only relatively recently through suburban sprawl they are becoming a “problem”. The biggest problems in that area are blasted stray cats, illegal trash dumping, druggies, car hoons, toy plane hobbyists, dirt bike riders and other varieties of two-legged idiots who wreck what park areas are in the region and harass the native animals – that’s what local government should be focusing their resources on dealing with.

As I mentioned in yesterday’s post about bogong moths, it’s quite incredible how we interfere with nature and then whinge when nature strikes back. Perhaps, as is the case with kangaroos, the corella populations have exploded since the arrival of Europeans in this country, but that doesn’t distract from that point.

I often ponder if a “Blade Runner” type future is what many of us deserve.