So this is what it’s come to – figuring out the species to save and those we allow to become extinct due to a lack of resources (and will) . Which will become the “living dead” and zombie species. How will we choose?

“I’m afraid to tell everybody we’re in a terminal situation. We’re confronting a whole raft of species about to go over the extinction cliff,” says Professor David Bowman, an expert in environmental change biology at the University of Tasmania.

It seems that even with the resources invested to date and a general increase in environmental awareness, not a single Australian species has come off the threatened list for over a decade.

Professor Corey Bradshaw from the Environment Institute’s Climate and Ecology Centre at The University of Adelaide makes specific mention of one of Australia’s iconic areas.

The following image shows one of the reasons. 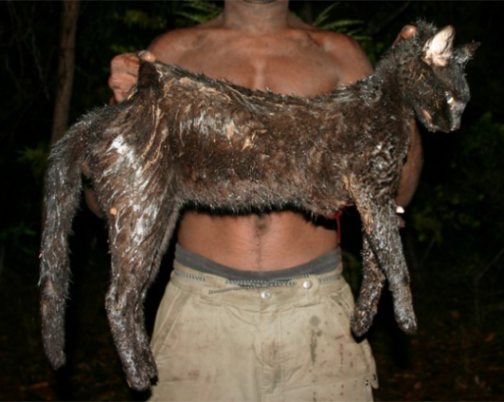 Feral cats are one of the culprits slaughtering our wildlife and pushing species over the brink into extinction. It only takes a few generations for a household cat to turn into this sort of killing machine. Even the smaller first generation ferals (the domestic cats  gone wild) are incredibly efficient hunters.

Cats have no place in Australia. However, the cats didn’t swim over here. We brought them.

But back to the grim assessment by Professor Bowman. I totally understand what he’s saying; but what a sad day it is when this has become the reality – that we now need to choose what species we try to rescue and what we allow to disappear into oblivion. It’s utter failure. If this isn’t a wake-up call, nothing is.

I look at some of the species on my patch of Australia, a couple of which are threatened; and I wonder if they’ll still be there for whoever owns the place to see in just 50 years from now – or anywhere else in Australia for that matter.

I removed most of the feral cats (I think) a few years ago, but I’m pretty sure they are back again. I can keep removing the cats; but they’ll just keep coming. It will take a concerted effort from all landholders for miles around to fix the problem and then it will still be temporarily, because while people in the region keep cats, it will just keep repeating.

And that’s just the cats – then there’s the foxes, the feral goats, etc. etc. etc .. and of course, the humans. My own impact isn’t lost upon me.

While all the little green things we do have some positive effect, it’s a band-aid covering a gangrenous wound. This is not going to fix our “basket case” way of interacting with our planet.

If we stop at the little green things and don’t properly tackle the big problems; we’ll still wind up with a planet that looks very different from today reasonably soon – and be poorer for it.