As long-time GLT readers would know, I’m not averse to discussing the topic of poo; in fact I approach the topic with what some would say is an abnormal level of interest.

It’s just that I see our poop as being such a great natural resource; but one we have turned into an environmental problem.. and the same goes for urine.

It’s so odd that we tend to see ourselves as an advanced and evolved society, yet we use drinking water to flush away our waste. According to the American Water Works Association Research Foundation, over a quarter of water consumed in USA households is utilized in toilet flushing.

Composting toilets are a great way to lighten your environmental impact, but if you’re not really into the idea of making one, buying such a beastie can be rather expensive.

The folks behind one of my favorite resources for all thing poo related, the Humanure Handbook, have answered the call for an economical composting toilet with the “Loveable Loo“. 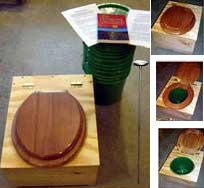 For between USD$145 and $200, you can have a Loveable Loo, complete with a copy of the Humanure Handbook. This cheap composting toilet has a hemlock base (linseed oil finish), a plywood top and an oak toilet seat. It comes with receptacles (fancy name for bucket) and is shipped in a wooden crate that can be used as a recycling bin. But wait, there’s more, you’ll also get a 20″ compost thermometer!

But seriously, these people are the poop composting experts and I think they deserve a medal just for making the Humanure Handbook free to read online, which has helped a lot of people rethink the issue of toilets.

The following video shows how the Loveable Loo is made.

Even if you aren’t really in a position to replace your current toilet with a composting version; the Loveable Loo composting toilet could be handy for camping, a holiday shack or disaster preparedness.

If a composting toilet simply isn’t for you, there are other ways to reduce toilet water use. For example, if you have an older style toilet without dual flush, try using a displacement object in your toilet’s cistern, such as a rock or bottle filled with water. Just ensure you place it in such a way that it doesn’t interfere with the flushing mechanism or jam the float.

Humanure.. it’s good s#$#
Your pee is precious
Sewage and wastewater treatment
The case for peeing outside