This story has been around for a little while now and it still unsettles me. Cats with jellyfish genes that make them glow in the dark.

A couple of weeks ago, Mayo Clinic researchers announced they had been successful in inserting a jellyfish gene along with a gene from a rhesus macaque (monkey) into cats. The jellyfish gene makes the offspring cats glow green and acts as a marker, the rhesus macaque gene has a more important purpose. In case you haven’t seen any pics of these felines, here’s what they look like. 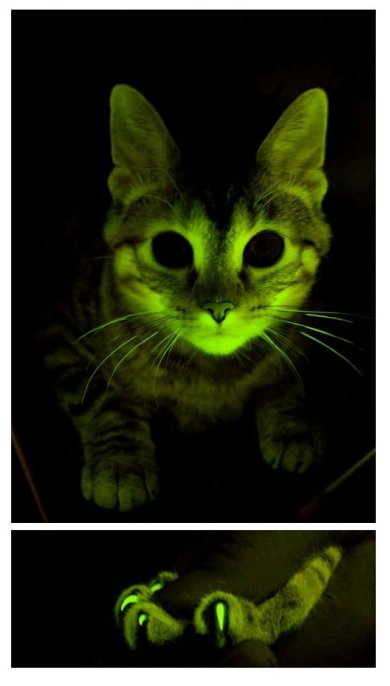 Unlike some other animals genetically engineered to glow for “we can do it so we will” type reasons, the Mayo Clinic’s genome-based immunization strategy is to fight feline AIDS and help find ways to combat human HIV/AIDS and other diseases; so it’s important work and a noble cause. You can read more about it here.

It still sends shivers up my spine. I’m not a “if we were meant to fly we would have wings” sort of guy – I’m all for advancement,  but messing with creatures like this just seems so .. wrong.

Selective breeding in animals has its share of issues (as well as benefits), but it’s a whole different ball game when traits of one species are introduced into an entirely different species. Heck, a cat and a jellyfish.. and a monkey?

While this experiment is a little freaky, it’s the prospect of experiments that could come I find the most disturbing; many of which will be carried out for the “greater good”. I can think of quite a few instances where seemingly noble goals came back and bit us on the butt.

Let’s say pigeons were genetically tinkered with and one of the side effects was that they became more aggressive. A few of them escape after pecking their handler’s eyes out and start breeding with other normal pigeons; passing on that trait. Our cities could be like Alfred Hitchcock’s The Birds!

OK, so that’s very tongue in cheek, highly unlikely and probably reveals more about my level of ignorance on this subject than anything; but I remember reading somewhere these glow in the dark cats have been breeding and they have wound up with glow in the dark kittens.

If I understand some concepts regarding this sort of thing correctly, this also means these cats are a new species and a species owned by the Mayo Clinic – and that’s another can of worms.

I’m sure the folks at the Mayo Clinic aren’t holed up in a lab somewhere, cackling and shouting “It’s Alive!” as they churn out all sorts of mutant beasties while plotting to take over the world with their army of flying monkeys, nor can you buy an Acme Li’l Genetic Tinkerer’s Kit online; but where are we heading?

Where is the line? Should there be a line? Will whatever line has been drawn be rubbed out some time in the future for the “greater good”?

At what point does a cat stop being a cat?

Or a human, a human?