The last 24 hours around here have been quite incredible.

Yesterday I spent about half an hour trying to find a large brown snake that had made itself at home on our verandah, just 6 feet from our door, and then took off into our garden when approached. I like and respect snakes, the problem is that browns are quite venomous (deadly at times), can be cranky and are very quick. This one wasn’t aggressive at all, he just wanted to get away from me.

I also discovered during our scuffle that they are very good climbers, something I hadn’t seen before. A member from Fauna Rescue whom I spoke to later in the day said that she had witnessed a brown snake climb a 9 foot vertical surface. She also told me that they can launch themselves over a distance 1.5 times their body length. I’ll bear that in mind next time :). 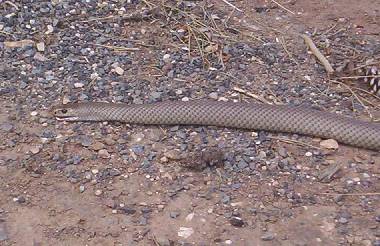 The brown snake (thankfully) lived to slither another day and I’m now in the market for a humane snake catching stick (extra long model) so I can catch then release them in the local reserve. I hate having to kill these magnificent creatures and thankfully I’ve only had to do it once in the last decade; but given the drought, I expect we’ll see many more of them around this year.

The next crisis occurred just as I was finishing up for the night. There was the screech of brakes followed by the sound of smashing glass. A young idiot driver with more testosterone than common sense was speeding down our road and hit one of our beloved local kangaroos right in front of our house. The poor kangaroo had horrific injuries and had to be destroyed. Given the circumstances, the police were called.

If you should accidentally hit and kill a kangaroo and it’s a female, be sure to check for a joey (baby kangaroo) and physically open the pouch; which was something I failed to do. When I first checked for a joey, I didn’t watch for movement in the pouch area for long enough. The police officer checked the kangaroo little later on, spotted something wriggling under the fur where the pouch is, opened it and discovered the joey, which was only around 6 inches long.

Kudos to the officer involved; he then communicated via his station with the RSPCA to see if there was any chance of the joey surviving given it was so young and by no means fully developed. He then gently wrapped the little critter in a rag, stuck it under his uniform shirt to keep it warm and then took it to someone who may be able to rear the joey. When kangaroos are born, they are little more than a fetus; they then spend the next months developing further in the mother’s pouch.

We all went to bed rather emotionally exhausted from the ordeal and then today, temperatures skyrocketed and we had a bushfire ignite a few hundred yards up the road. The wind was blowing towards us; but my biggest concern was the bushland reserve area – it’s somewhat of a wildlife oasis in amongst suburbia. I say somewhat as unfortunately the area also attracts its fair share of motorbike riders and plenty of other assorted idiots, like the young driver mentioned above.

Thankfully the CFS (fire department) was very quickly on the scene with an astounding amount of equipment and manpower.  Only 7 acres of the reserve was burned. We haven’t been informed of the cause, but there was no lightning in the area so it was most likely caused by broken glass acting as a magnifier or deliberately lit. Either way, man was involved.

We live in a rather unique spot here. We are so privileged to be surrounded by so many animals and trees; but the situation does highlight the constant conflict between man and the environment as we continually encroach upon natural habitats. I really fear for this area and we are fighting a battle on many fronts to try and ensure the reserve is preserved, respected and properly protected.