Brookesia micra reaches a maximum snout-vent length in males of 16 mm, and its total length in both sexes is less than 30 mm at maturity – under 1.25 inches. As a juvenile, it’s much smaller of course and this image highlights just how tiny a young Brookesia micra is. 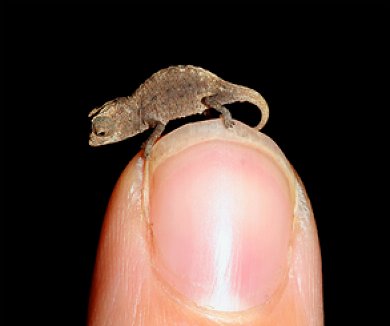 What I find totally mind boggling is so much ‘detail’ in such a small creature. In that tiny bundle is a fully developed brain, heart, backbone, tiny eyes, claws etc. etc. etc. 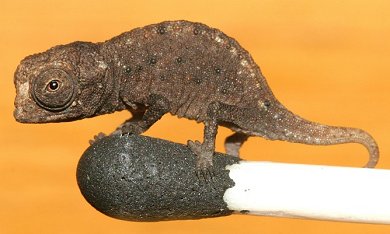 This little guy’s eyes remind me of my own first thing in the morning.

The chameleon is found on the islet of Nosy Hara in Antsiranana, Madagascar. They live in leaf litter during the day and climb up into tree branches during the night. Before you start envisioning the chameleon high up in the forest canopy; the branches they hang out in are only a few inches above the ground.

I wasn’t able to find out much more about it besides a stack of technobabble that may interest the more academically-inclined among you; but I read on a few sites Brookesia micra is threatened by logging and other deforestation practices. It would be a shame to lose a creature we know so little about so soon after it has been identified.

As I mentioned at the start of this post, this little guy is among the smallest vertebrates in the world. A few weeks ago I wrote about the world’s smallest frog, Paedophryne amanuensis. At 7.7 mm, itt makes Brookesia Micra look like a giant and is the smallest known vertebrate on our planet.