The smell of smoke was strong today, not from fires close by, but from the ones that have ripped through Victoria; some of which are still burning, hundreds of kilometers away.

It is now nearly 2 months since any rain to speak of has fallen on the block and the recent haze is a a regular reminder to stay alert.

As mentioned in a recent post, aside from the terrible human tragedy, the toll on wildlife from the Victorian fires will be huge – some estimate over a million creatures will have perished.

But even before the fires, animals were dropping dead due to the heat wave immediately preceding the blazes. I found a dead magpie outside my shed during that time, even though water was close by. I had been leaving a dish out for birds, refilling it up to 5 times a day. I thought perhaps it was just a coincidence, but I then noticed other birds staggering like drunks when I did my rounds of the block later that day. 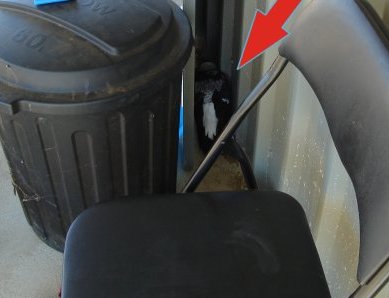 The above photo shows a magpie crammed into space between the door and wall to try and escape the heat. There were up to 3 wedged into this little space at times during the hottest days. Magpies out here are usually reasonably wary, but their desperation was forcing them to seek refuge under the verandah, even poking their heads in the door at times, regardless of the presence of my dog. The verandah and shed offered little respite as temperatures were pretty much the same indoors as outside. 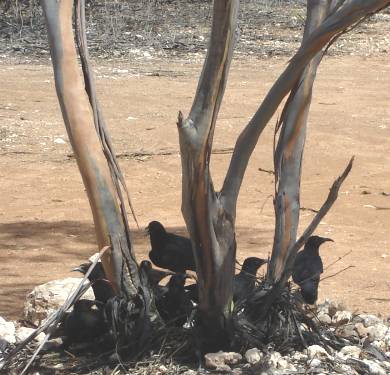 Currawongs crowding in a bit of shade by the shed as temperatures hit 47C (nearly 117F) – there’s 8 of them packed in that small area. 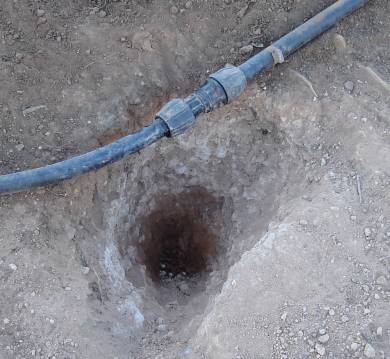 A hole dug by animals to try and get a moisture from under a pipe that was leaking a single small drop every 10 seconds. They wasted their precious energy, lured by the tantalising smell of moisture. 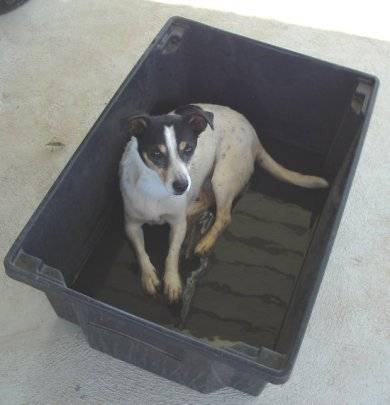 I couldn’t do much for the wildlife, but at least I was able to keep Niki the Wonderdog from heat stroke. She lay in that tub for hours each day. An inch of water was enough to take the edge off the heat for her… just.

Aussie animals generally speaking are pretty tough critters and the animals of this area are used to dry, hot conditions – but the weather we had was extreme to say the least. One day of very high temperatures is nothing, a few days, not uncommon, but two weeks is freakish.

Wildlife Victoria recently reported the death of 1000 Grey Headed Flying Foxes during a two day period of the heat wave. The animals were literally falling from the sky.

According to the Sydney Morning Herald, ringtail possums were also falling out of trees and distressed kangaroos became too weak to jump fences.

We can expect to see more of these events. There may be up to 300 per cent more days of extreme fire danger a year by mid-century and drought in these parts looks likely to become more frequent.

There’s even talk of shifting agricultural operations from the south to northern  Australia, large sections of which are under water at the moment – the other extreme.

That shift may save our food and primary industries (for a while), but it may not help the native animals who will be left to adapt to even dryer conditions – in what is already the driest state in the driest inhabited continent on Earth. They may have more territory to move around in, but what will that space be like?

For all our talk of greening the planet, carbon dioxide emissions continue to rise, fueling climate change and creating catastrophic weather events. Christopher Field, a researcher from the Carnegie Institution for Science, states we are adding carbon to the atmosphere even faster than in the 1990s and we are facing worst case scenarios, perhaps even beyond those predicted. He points the finger at fossil fuels including coal.

James Hansen, director of Nasa’s Goddard Institute for Space Studies and climate change go-to guy is becoming more vocal about Australia, lumping us in with a few other governments, saying “These governments are not green. They are black – coal black.”

Isn’t it ironic that when it gets hot and we flip the switch to turn on the air conditioning, often that electricity comes from coal fired powered plants. It’s a little like a drunk self medicating with alcohol. Even the bush fires are now part of the climate change feedback loop as they have ejected millions of tons of carbon dioxide untold volumes of heat into the atmosphere. What a mess.

It’s something to bear in mind as we sit in our relatively cool houses and watch the animals outside struggle for survival during such events.

Speaking of which, wildlife and animal rescue organizations are reelingfrom the increased workload from the heatwave and fires, particularlyin Victoria. To assist with relief efforts for animals, donations canbe made to RSPCA Victoria and Wildlife Victoria.

This country, and all countries, really need to get moving on implement clean, renewable energy in a massive way. All this talk of stimulus packages, all these billions flying around bailing out industries that contribute to our environmental woes – that’s where much of that cash should be going instead.