We’re very lucky to have all sorts of birds visiting us here and some species nest in our yard, among them; blackbirds. Blackbirds aren’t native to Australia – they were introduced to the country in the 1850’s and are now common throughout south-eastern Australia.

They can be somewhat of a pest in orchards and veggie patches, but probably the greatest annoyance to me is their habit of throwing large quantities of mulch and bark out of our garden beds while they hunt for insects. Sometimes I find myself sweeping several times a day; but I’d rather the inconvenience than to lose them altogether. Still, we don’t actively encourage them given they are an introduced species and we approach our relationship with the blackbirds on a “live and let live” basis.

With spring well and truly under way, the local blackbirds have been busy with mating and nesting. These little guys hatched just a couple of days ago. Actually, this is the second clutch from the same pair this season which I thought was a little unusual (any blackbird experts out there?). 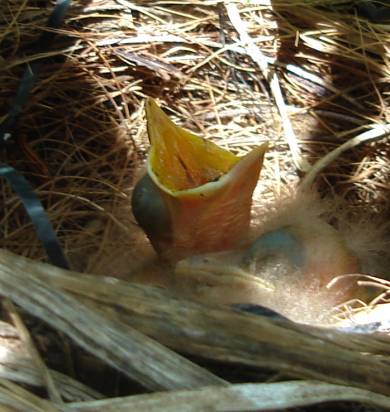 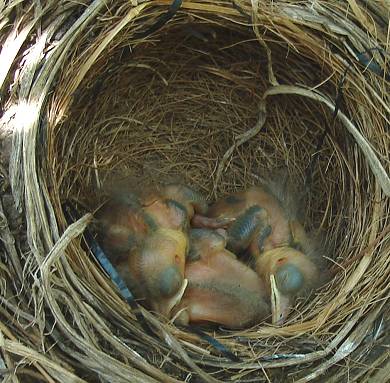 Usually I wouldn’t disturb a nest, but the tree the blackbirds chose is under our pergola and the branch holding the nest was being trained using some rope – which of course decided to snap yesterday. This left the nest in a rather precarious position with the fledglings in danger of toppling out onto the concrete about 8 feet below. BlackBird nests are cup shaped; constructed from dried grass and mud, and lined with fine grasses. They look quite comfy, but are by no means very solid.

As you can see, the parent birds weren’t overly impressed with me photographing their young and messing with the tree – this is the male giving me the evil eye. The racket they generated during the ordeal was considerable :) 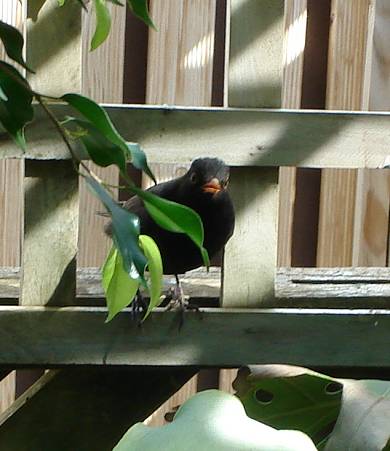 It’s somewhat of an old wive’s tale that handling fledglings or nests will cause the parent birds to reject the young, but it’s still something you should avoid if possible. As you can see in the pics above, the young barely have any feathers at this stage of their development, and they can lose body heat quickly. It’s important that the activities of the parents aren’t disrupted if possible so they can maintain the fine balance needed to feed and keep the fledglings warm to increase their chances of survival. Where nest interference may cause problems is early in the incubation process before the fleglings hatch as the parents may decide the nest is in a high risk area and abandon it.

Blackbirds grow incredibly quickly – 2 weeks incubation period and then only 2 weeks spent in the nest. After that, the parent birds will feed them outside of the nest for a while and teach them to forage. It’s an amazing process to watch Blackbirds can get quite tame and cheeky; and it’s easy to get within a few feet of them.  Occasionally they’ll even fly into my office.

Our blackbirds love dried dog food and were stealing large quantities of the stuff much to our dogs’ annoyance. We tried covering the feed bowls – but the blackbirds continued to try to knock the covers off. At one point when messing around with the food bowls while trying to figure out a better system; a blackbird landed beside me and looked at me as if to say “Ahem, what are you doing with *my* food!?”.