Most of us would be familiar with the sickening sound of a bird colliding with a window.

Birds striking glass cause the deaths of millions of these creatures every year. A quarter of a million birds in Europe reportedly die each *day* through collisions with glass.

It’s not that birds are stupid per se – they just have a different depth perception, viewing the reflection on glass as an extension of the landscape.

Those clever Germans to the rescue! Arnold Glas, based in Merkendorf, have developed a form of insulated glass that can also help minimize birdstrikes.

The use of a special UV reflective coating is where the magic happens. It’s pretty much transparent to us but is clearly visible to birds as they can see a broader UV spectrum than we can.

Here’s how it looks: 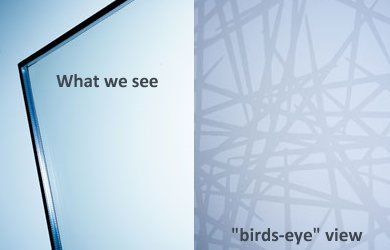 Called Ornilux, the glass has proven to be 76% effective in reducing bird strikes.

A product like this could save many millions of our feathered friends if widely used, but the green goodness doesn’t stop there. Being an insulating glass product, it also helps reduce noise and energy costs.

Even when a house is fully insulated – walls, floor and ceiling; up to 48% of the heat loss over the colder months occurs through single glazed windows. Over summer, window glass is also a major source of heat gain.

Arnold Glas have won several awards for Ornilux, and rightly so!

I haven’t seen it available in Australia as yet, but in the USA it is distributed by California-based Roeder Windows & Doors.