Bees are another creature I never gave much thought to prior to Green Living Tips and my knowledge of them was pretty much limited to their sting, production of honey and “pollinating stuff”. Running GLT has been wonderful in teaching me that so- called lowly creatures deserve more of my respect, interest and assistance.

It’s the pollinating work that bees too that helps put so much food on our tables and contributes billions of dollars to economies each year. While the official value of bees’ contribution in 2000 in the US was estimated to be around $14 million, beekeepers peg the real value of their operations at $50 billion, based on retail value of food and crop grown from seed that relies upon bee pollination.

Bees have been in decline for some years now, some of it due to the mysterious Colony Collapse Disorder (CCD) where adult bees suddenly disappear from a hive.

While Colony Collapse Disorder has pretty much disappeared from the headlines, it hasn’t stopped occurring. At the 2012 North American Beekeeping Conference & Tradeshow, the annual meeting of the American Beekeeping Federation, it was highlighted that CCD still presents a serious threat.

A clear, present and known danger is pesticide exposure. Of special concern are neonicotinoids, a class of pesticides taken up and expressed a plant, which bees then forage and pollinate. Another exposure route is planter exhaust, where talc and air mix are expelled into the environment as automated planters place neonicotinoid-treated seeds into the ground during spring planting.

Pesticide poisoning through spray drift is also becoming quite a problem; as has the range and accessibility of pesticides allowed for use.

“Because EPA has not adequately regulated certain pesticides, the food system, including many of the foods we enjoy eating most, are at risk,” says John Kepner, Project Director for Beyond Pesticides. “We can’t afford not to take action to protect pollinators – for wallets and dinner tables alike.”

While you and I may not be able to find the cause and cure for Colony Collapse Disorder or address commercial pesticide application directly, we can help raise awareness of these issues; learn more about bees and their challenges – and also show a little more kindness to bees in our day to day life.

Previously, if I saw a bee in trouble, such as struggling in a puddle of water, I really wouldn’t give it a second thought; after all, it was just a bee and it might sting me. These days I’ll stop and assist the little guy, using a piece of bark or a stick for it to climb onto and then putting the bee someplace safe to dry off. While I’ve never been stung nor has a bee even looked like getting aggressive as escape is its primary concern at that point, if you’re allergic to bee stings, this may not be such a good idea.

Out on my block there’s a colony of bees somewhere reasonably close by. During the summer, they’ll often invade the downpipes of my shed looking for moisture or make a beeline (sorry) for Niki The Wonder Dog’s water bowl. Hundreds of them will come and go in an afternoon. 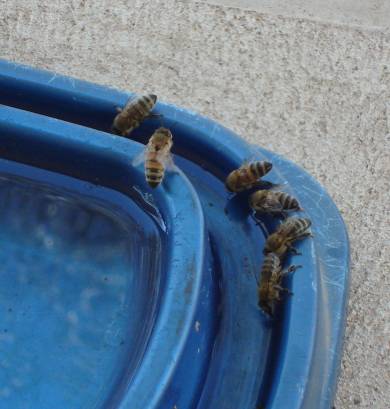 They aren’t aggressive, just thirsty, so instead of shooing them away or removing the bowl as I would have done in the past, I just set up another water bowl for Niki inside. Somewhere I have a photo of Niki and the bees sharing the outside bowl and all were getting along quite well. While I’ve discovered that bees are nowhere near as aggressive as I was led to believe when I was young, it’s certainly something I don’t encourage though for obvious reasons.

I acknowledge there are certainly some circumstances when allowing honey bees to share your space is not only inconvenient, but dangerous. If you find yourself in this situation, try contacting an apiarist group in your area for advice. Someone may be able to remove the colony rather than destroy it. Every bee counts now.

Learn more about bees and the huge range of crops they pollinate in my article “Bees And Your Food” – oh, and spare a bit of time to learn about the plight of the bumblebee too; another important pollinator.