My first memories of sleepy lizards are from when I was very young and visiting my great grandmother in South Australia. I saw what looked to be a pine cone sticking out from underneath some sheets of corrugated iron in her back yard and had quite a shock when it moved.

Australia’s sleepy lizard, also known as a shingleback, bobtail, two-headed or pine cone lizard is a fascinating creature. At my place out in the boonies, I’ve been privileged to have 3 adopt me  – Sleepy, Sleepette and Sleepy Jr. I’m incredibly creative when it comes to naming creatures. 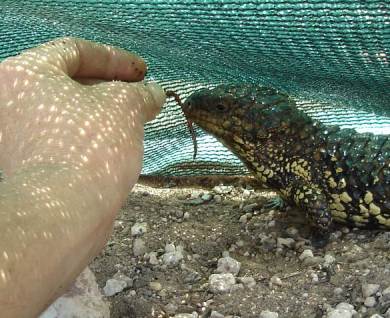 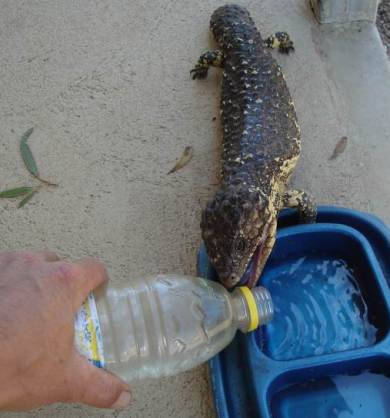 Sleepy is the tamest of them all, allowing me to hand feed him (he loves worms). He spends much of his day grazing outside the shed, coming onto the verandah quite regularly for a bit of shade or a drink from Niki The Wonder Dog’s bowl. I’ve tried to discourage this by giving him his own bowl, which hasn’t worked. Occasionally he’ll poke his head inside the shed to say g’day.

He simply isn’t fussed by the dog or I and is curious to the point that if we are doing something outside he’ll amble over for a look.

Sleepy Lizards grow to around 16 inches long and are quite bulky. The odd looking tail, as well as being utilized for fat storage to help them get through the winter, is also part of its suite of defences. The tail is shaped somewhat the same as the head of the lizard, so if a predator grabs it by the tail thinking it’s the head, the lizard can whip round and give the offending creature a nip.

I’m told these lizards have quite powerful jaws and can inflict a nasty bite, which made me a bit hesitant when I first hand-fed Sleepy, but for such a cumbersome looking creature, he is incredibly gentle and precise in taking food. I don’t try to pick him up as I think that may stretch the friendship a little.

Another defensive mechanism Sleepy Lizards have is the the tough scaly skin, but the most spectacular feature is their large mouth and blue tongue. When alarmed, the lizard will open its mouth wide, hiss and stick out its bluish tongue which really stands out against the pink of the inside of its mouth.

Shinglebacks mainly eat plants and insects. In urban settings, they’ve also been known to help themselves to dog food.

Sleepy Lizards can live for a very long time – up to 25 years. They are loners for much of the year, but during mating season, they of course get together. They are monogamous, having the same partner throughout their lives, unless one of the pair dies. They tend to stick within a certain area and are said to have excellent homing abilities – even to the point of using celestial cues to determine the compass bearing of the outward journey and then reversing those to find the way back “home”.

Sleepy lizards do not lay eggs – their young are born live; but they don’t hang around for long. After a couple of days they head off to establish their own patches.

Shinglebacks are really common in South Australia, both out in the bush and in our towns and cities. While life in the bush can be tough for them, in urban areas they also face many threats; particularly from dogs and cats. While Sleepy and Niki get along (the lizard will actually waddle up to Niki – I have no idea why), I do keep a close eye on their interactions.

Like most Australian lizards, Shinglebacks can not be kept without a permit – but I think it’s nicer to have these creatures come and go as they please and for them to not depend upon me.

Their antics, usually centered around Niki’s water bowl, have brought me great enjoyment and quite a few laughs again this season and have acted as another reminder of just how amazing the creatures of our planet are.

The Shingleback is one of a half dozen species of Australian blue-tongue skinks –  learn more about another quite different looking species, the Common or Eastern Blue-tongue Lizard.