Tawny Frogmouth is an unusual name; but it’s a very unusual Australian bird. Masters of camouflage, the Tawny Frogmouth blends in perfectly in bush surroundings. Even when possibly threatened, they’ll sit very still.

Tawny Frogmouths are a nocturnal bird, so you’ll rarely see them active during the day. I was privileged to come across four of them a few days ago and it was only because of their numbers that it caught my eye. A single bird would have gone unnoticed:

These Tawny Frogmouths were only seen as 4 of them
congregated on the same branch. One bird on its own
would have most likely gone unnoticed – great camouflage! 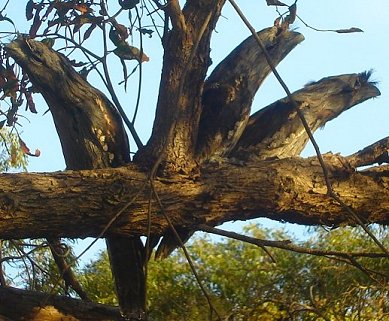 A closer look at 3 of the same birds taken a few days later –
Tawny Frogmouths will “freeze” themselves  in unusual poses
in order to help avoid detection. A truly incredible Australian bird!

I was able to get close enough to touch them, which I refrained from of course. Even at such close range, the birds didn’t move a muscle, not even any eye movement. Amazing stuff, especially the poses they freeze themselves in.

The Tawny Frogmouth is found throughout eucalyptus bushland in Australia and parts of Papua New Guinea. Often thought to be a member of the owl family, they are actually a nightjar.

They grow  to around one foot to eighteen inches long – the ones above were probably about a foot (30cm) from the top of their heads to the tip of tail.

Tawny Frogmouths aren’t the most energetic of predatory birds, they prefer for food to come to them. They prey on rats, mice, lizards, frogs and large insects. They catch their food via a rather gaping beak rather than by claw.

They usually mate for life and I found it particularly curious that four of them were together when I first sighted them – usually they are seen singly or in pairs. I thought they might have been a brood of fledgings, but it appears that they only lay a couple of eggs at a time.

The birds also appear to be quite territorial. The two photos above were taken on different days. On the second occasion, three of them were on the same low branch, even the same section of branch! It makes me wonder how many times I have walked under that branch over the months and they’ve been sitting there, given their habit of freezing in position even when potential threats are close by.

It really makes my day when I get a glimpse of animals like this; it’s an honor. The area where I spotted these birds is where I am carrying out a small project to help clean up, monitor and protect bushland. Seeing creatures like these Tawny Frogmouths helps remind me that however small a patch of bushland is, it’s more than just trees – it’s a habitat for many special Australian animals. Places like this are certainly worth protecting from the idiot motorbike riders, garbage dumpers and other ignorant fools who seem to be hell-bent on destroying it.