The Nankeen, or Australian, Kestrel is a type of falcon and one of Australia’s smallest birds of prey attaining only about 35 cm (just over 1 foot) in length.

The Nankeen Kestrel will scan the countryside for prey from a perch, or will hover over an area until it sights its dinner. When hovering, these falcons seem to barely flap their wings. When prey is sighted, they’ll slowly drop down, then hover again until within striking distance.

They are a beautiful bird with striking brown patterns; but when viewed from beneath when hovering, the Nankeen Kestrel appears to be white.

We were fortunate enough to have one visit us a while back; but these photos really don’t do it justice. We were very surprised that it hung around when it spotted us, but it seemed relatively unpeturbed by our presence. 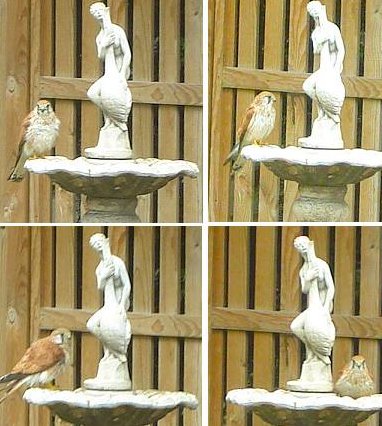 The Nankeen Kestrel prefers open country such as grasslands, paddocks and fields and its diet consists of insects, small reptiles and mice.

Often mating for life,  the Nankeen Kestrel lays up to 5 eggs which hatch after 4 weeks incubation. They will often used abandoned nests of other birds and have been known to chase out a nests’ occupants if need be. If they do have to go to the trouble of building a nest themselves, it’s usually  a somewhat messy affair.