A common sight in the Australian bush and many Aussie backyards is the blue tongue lizard. They are beautiful, docile creatures and as the name suggests, these lizards really do have a large, flat blue tongue!

The bright color of the tongue is used along with hissing and puffing up to scare off predators. They have strong jaws and bite at times, but being relatively slow; their tongue is their best method of defense. Some species also drop their tails as an escape strategy. It does grow back, but more stumpier.

They can co-exist quite happily with humans, but cats and dogs take their toll. Being slow movers, they are also often killed on Australian roads over the summer months.

We found this cute guy just outside our front door – so it was a good opportunity for a couple of quick pics and then to move him to a safer area of the yard. Unfortunately, you can’t see his amazing blue tongue in this photo; but we didn’t want to upset him just so he’d put on the display – and yes, I was holding him gently :). 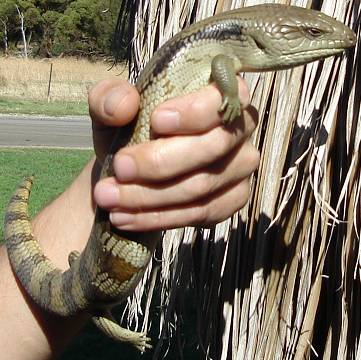 Blue tongue lizards love leaf litter and hiding under shrubs, but being a cold-blooded creature, they are also often seen sunning themselves on pavements. In a previous house, we had a huge one we named “Godzilla” make our compost heap his home. That’s another point for helping to protect blue tongue lizards – be careful when moving branches or other garden waste as there may be one lurking in there. They aren’t the fastest of movers and they’ll tend to freeze when threatened if they have coverage, so it’s difficult for them to avoid injury through sudden human activities.

Blue tongue lizards are omnivorous – eating not only insects; but also plants, fungi, small animals. Some species are known to feed on dead animals.

The mating season occurs late in the year and it’s not uncommon for blue tongue lizards to have the same mate over a number of years. Baby blue tongues are born live in litters of up to 18 depending on the species and are self sufficient a few days after birth and have a lifespan upwards of 20 years.

If you’re interested in learning more about Australian wildlife; use the Green Living Tips search feature and type in “Australian Wildlife”. I try to publish a new article on Aussie critters that are local to our area along with photos every couple of weeks. You can also subscribe to our free newsletter on the right hand side of this page for updates via email!