It’s only very early summer here in Australia, but it’s shaping up to be one of our worst bushfire seasons in history.

A couple of months back (still in winter), I was digging around in a section of our garden and noticing how dry the soil was – even though we irrigate with recycled water and mulch heavily. While our gardens were looking ok, any water we’re adding just seemed to soak down through the soil very quickly. It was certainly a harbinger of things to come. Evaporation rates of any surface water are also quite incredible.

The kangaroos in the area are coming increasingly closer to our front door in search of green vegetation and moisture – in some instances, just a few feet away. The other night, one of our girls came home to find a big male kangaroo in her parking spot – and he didn’t want to budge. We give these guys the right of way :).

You may have heard of the current bushfire situation in Australia; although I’m not seeing much of it on international news services. Like I said, it’s still very early in the season, but fires over the last week or so have burned out over half a million acres of bushland in Victoria (one of Australia’s smallest states). In that state, the EPA is recording some of the highest air particle levels ever due to smoke that’s blanketing the countryside. In one interview I read, the person commented that it was 4pm Daylight Saving Time, yet it was pitch black outside his how. The fires are so intense that they are creating their own weather; including lightning; further complicating matters.

Here in South Australia, we’ve been reasonably lucky by comparison I guess. We’ve lost around 220,000 acres since towards the end of November, but we had a bit of a scare last week when 200 hectares (around 440 acres) of bush and grassland quite close by to us was destroyed by fire. 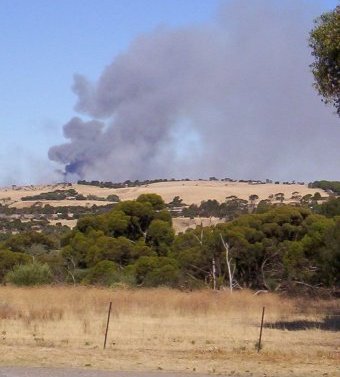 Thankfully, the local fire authorities got onto it quickly. At one stage we could see multiple planes and helicopters water-bombing it – it was somewhat reminiscent of the old King Kong movie. We were lucky in that the wind was reasonably light when it started and blowing away from the coastal strip where most of the population is.

While 440 acres doesn’t sound like much, given that it was bushland close to an urban area, it was a great shame to lose it – we have so little as it is. If you take a look at satellite maps of South Australia, for the most part it’s been cleared – all within just over 100 years.

Sure, the Australian countryside is somewhat used to fire; but in order for the land to regenerate, there must be rain to follow – and we’ve had none. My fear is that if the drought goes on much longer, the affected land here and in other states will be degraded further through wind, sun and salt and take longer to rebound. The area where we live is already looking worse than it did at the *end* of last summer. Added to this, bushfires release carbon dioxide, methane, hydrogen and carbon monoxide. In older growth forests, some of this CO2 has been locked away for hundreds of years – then suddenly it’s unleashed en masse. It does make a difference. The bushfires in Indonesia in 97 and 98 caused a carbon dioxide spike globally.

Since the fire last week, we’ve had a couple more days of 38 degrees celcius plus (100F +) and no rain. We’re very concerned about the bushland even closer to us as it will only take a lightning strike or one of the many careless idiots who frequent the area to set the place ablaze.

Even as I type this I can hear motorbikes (illegally) in the reserve area and the fools at the aerosport club playing with their methanol powered radio-controlled planes. One spark, one lick of flame is all it will take – and there’s plenty of whackos around prepared to provide it.

“The worst drought”, “the hottest summer”, “the worst bushfires” – all these things are hitting the headlines over here; yet we still don’t seem to realize that much of the reason for all this is of our own doing. Nature is screaming at us, yet for the most part we seem to be quite deaf.