The oil rig is firmly lodged just off Sitkalidak Island in the Gulf of Alaska. It’s reported the Kulluk, used in Arctic oil exploration activities, is carrying 150,000 gallons of diesel and about 12,000 gallons of oil and hydraulic fluid.

According to American Land Conservancy, the waters around Sitkalidak Island host abundant food sources and attract large numbers of seabirds and marine mammals.

Shell assures us there are no signs of environmental impact and no fuel or oil has leaked (yet). 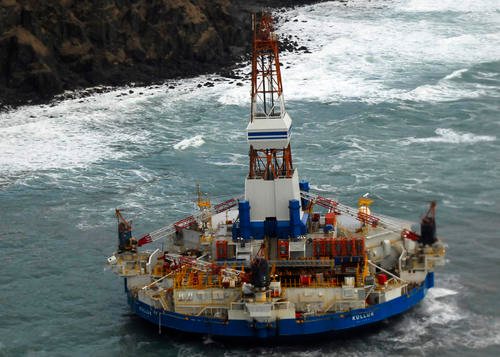 Greenpeace says the incident shows “how utterly incapable Shell is of operating safely in one of the planet’s most remote and extreme environments” and states Shell has “lurched from one Arctic disaster to the next”.

While disaster seems to have been averted in this incident, this is a tap on the shoulder with regard to how unwise it is to pursue oil exploration activities in the Arctic region. Aside from an increased level of danger generally, its remoteness and often savage weather means environmental damage that will undoubtedly occur will be harder to address – if it can be addressed at all.

Unfortunately, this tap will likely be ignored and a slap will undoubtedly follow.

The fact that more of the Arctic is now open to exploration due to melting sea ice caused by a planet being warmed through the effect of emissions from the burning of fossil fuels would almost be amusing if it wasn’t so absolutely tragic. It’s a scenario the oil barons must be high-fiving over daily.

This is a done deal – unless some sort of miracle takes place; pillaging of the Arctic is going to happen regardless of any protest and no amount of “we told you so”, wailing and gnashing of teeth or rending of garments after the disasters occur will bring back a single dead animal. It’s a shame.

One of the user-contributed spoof ads on GreenPeace’s “Arctic Ready” site sums the situation up well. 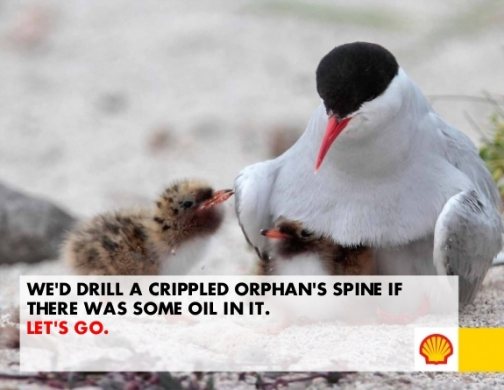 While pointing the finger at a faceless multinational is easy; I’ll also be thinking about my own indirect role in oil related disasters next time I jump in my car. Perhaps we all should.

Not that just thinking about it will do any good.