An uninsulated home is an expensive home to run in terms of electricity and fossil fuel consumption and then there’s the environmental impact associated with those energy sources.

Even an insulated home will lose heat or coolness to varying degrees through poor choice of insulation materials, incorrect installation or through issues such as thermal bridging.

Thermal bridging is where materials that are poor insulators come in contact with an area outside of the insulation – such as nails. These act as conduits for heat or coolness to escape or to let both extremes in, depending on where they are situated. It can be a difficult issue to get around.

I remember reading about a substance called Aerogel a couple of years ago. It’s also known as “frozen smoke” – see the image below and you’ll see why. At that point in time NASA was using it to trap space dust particles aboard the Stardust spacecraft. 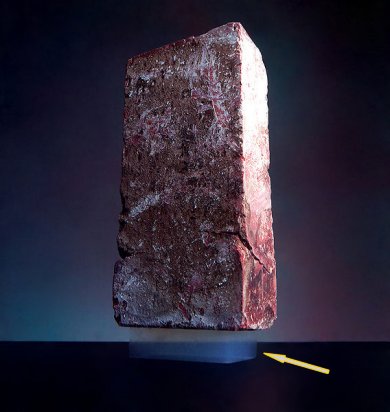 Aerogel aka Frozen Smoke
This 5+ pound brick is being supported by
0.07 ounces (2 grams) of the substance

Aerogel is now getting attention for more mainstream purposes such as insulation applications, specifically targeting thermal bridging issues. Given its attributes, it’s well suited to this; in fact, aerogel is said to be the highest insulating material in existence.

An aerogel insulation blanket is a mix of of silica aerogel and fibre reinforcement to make a durable, flexible material.

One such Aerogel type insulation product is ThermaBlok. According to the manufacturers, Acoustiblok, Thermablock is 100% recyclable, does not contain ozone depleting substances, is comprised of 95% air and of the solid component, 30% is recycled content.

Thermablock is unaffected by age, moisture, mold or water, is “Class A” fire rated and also adds acoustic isolation – cutting down on noise pollution entering your home.

While Thermablock only appears to be sold in relatively narrow strips to deal with thermal bridging – imagine your entire house insulated with this stuff!